Miracle On The Hudson: A Friend’s Story You can never know what the experiences are of the person sitting next to you. I met Michelle Evans on a spinning bike. We both take Stacey Griffith’s classes at SoulCycle multiple times a week and through our shared passion for this physical activity and our instructor, we’ve become friends.

One day last summer, Michelle and I went to get a juice after class. While standing online, Michelle surprisingly told me she had been on US Air Flight 1549, the plane that famously crash landed in the Hudson River after a flock of geese hit the engines. I was stunned. I had no idea that someone I saw almost every day had survived of one of the most famous plane crashes in history–an incident everybody had seen on the news or read about in the paper, and one that none of us ever could imagine going through.

Michelle was the first person off the plane. She was seated in the exit row, seat 10A, right next to the door. Michelle was terrified of flying and always chose that seat if it was available. How many times have we chosen a seat in the exit row for the legroom, but ever imagined we would actually be the one to open the door?

Today marks the five-year anniversary of the crash of flight 1549. I asked Michelle if she would share her experience with those of us who know her so well from Soul Cycle, and with the Style of Sport community. Michelle kindly agreed. I asked Stacey Griffith to join our conversation as she is someone who has become an important part of the positive experience Michelle has taken away from this life-changing event.

The images below are pages from the book Miracle on the Hudson which Michelle gave to Stacey for her birthday. She annotated it with Post-It notes of her personal experience from that day. “THURS JAN 15 2009. SNOW IN THE AM. I WAS ALREADY VERY NERVOUS SINCE I HATE FLYING. I HEARD THE SNOW WOULD END MID-DAY SO I CHANGED MY FLIGHT TO THE 3:30 PM (NOT SUCH A GREAT IDEA). I WAS LIVING IN CHARLOTTE, NC AT THE TIME AND CAME TO NYC FOR 1 DAY TO HAVE MY FINAL WEDDING DRESS FITTING. I WAS VERY ILL AND ALMOST CANCELLED THE TRIP. BUT I WAS GETTING MARRIED ON FEB.15, 2009 IN MAUI, HAWAII”

ME: I don’t really even remember everything that happened and actually the book gives the best recounting. It had snowed that morning but it was clear when we left. If you remember last week when the weather was 11 degrees — that’s how cold it was that day. When I think back I still wonder, how the hell did I go into the water? My memory of everything is warm.

We were in the air for 3 minutes but it seems like it was much longer. I am a nervous flyer and have the same routine I do each time we take off. I wear a hooded sweatshirt because I don’t like to hear the engines and when you sit in the exit row you’re right above the engines. I had my earphones on and my US Weekly. I had changed out of my high heels and was wearing my pink Uggs. I always look out the window because I want to see what’s going on when we take off. My head is generally plastered to the window most of the flight. As I looked out I saw these black balls fly into the engine.

SG: You actually saw the geese fly into the engine? What a trip that must have been!

ME: I didn’t know what they were. I literally thought… were those birds? But the thing that scared me was that immediately flames came out of the engine and instantly I thought, Oh my god…  I’m going to die. I smelled smoke. Everyone smelled it, but what was interesting was that no one screamed. No one said anything. It was very calm. What I didn’t know was that the geese had hit the other engine as well and both engines were off. We were just gliding.

SG: So was it quiet?

ME: There was total silence

ME: Total silence. The whole time. Not a word. No flight attendants. No beeping. No “Hey by the way…” It’s amazing when I think about what was going on with the plane and what Sully [Capt. Chesley “Sully” Sullenberger, III] was doing during that time period.

ME: Oh yeah, I knew exactly where we were going. We were too low to make it to Teterboro and he positioned the plane so we were parallel with the skyline of Manhattan. We literally banked over the GW Bridge. We were so low at this point there was no way we could make it to Newark. This is the point when Sully said to Laguardia, “We cant make it back. I’m going to have to land in the water.” 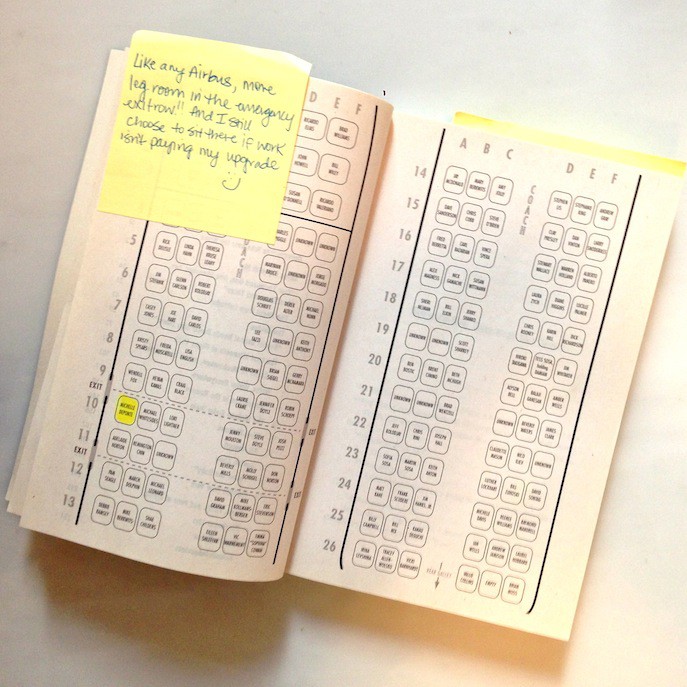 THE SEAT MAP WITH MICHELLE’S NAME HIGHLIGHTED IN 10A

SG: Thank God he knew how to fly gliders.

ME: I know. He had his professional glider certification and a phenomenal aviation track record

CL: And you guys have no idea whats going on?? You’re still just sitting there in silence?

ME: Well I knew what was going on because I was staring out the window and could see it.

SG: Didn’t the person next to you say anything?

ME: He asked me what was going on and I told him something hit the engine. That it blew up and the engines were off. I said “We’re descending. We’re descending in the water” and I’m just watching Manhattan as we’re going down. And then the only communication we had was when Sully announced, “Brace for impact.”

We all sat in silence holding each others hands. I never felt the desire to cry. I was actually calm. It’s a blur after that but it was a perfect landing. I don’t remember the crash at all. Kind of amazing that the actual impact has been erased from my memory. I have had way more turbulent landings on planes that didn’t crash.

SG: So the plane came to a stop after you landed and what did Sully say?

ME: Well I was already out the door.

CL: Had you read the “what to do in emergency” card?

ME: No! I said to myself Fuck I wish I’d read that card! I ran off the plane and started running back and forth across the wing, but there was nowhere to go because there was no boat there yet. There were no life rafts.  There’s a slide on the wing and in the front of the plane when you have a crash landing but they hadn’t opened. So when I got out there was nothing.

Several men ran out after me and jumped into the water. I had no idea what was going to happen. I thought the plane was going to blow up. So I jumped in and was swimming in the Hudson River. And this is my favorite part of this whole experience. I was floating in the water in my pink Uggs, looking up into the sky. I could see the Airbus floating in front of me and I thought, Oh my god… I just survived my biggest fear! I felt amazing. I felt free.

Finally someone started yelling at me that I needed to get out of the water. Probably a good idea given the 10 degree weather. By the time I was pulled out my entire body was blue. I had hypothermia and I was shaking uncontrollably.

CL: That’s just so amazing. How many people have these terrifying fears of something but they never actually experience it and resolve it.

SG: Or that it happens and it’s like, what was I afraid of.

ME: There are times when I’m like I dont give a fuck because I survived a plane crash. I have very little patience for things that don’t matter. I try to focus on the things that do. I take advantage of every day. I take more risks because you don’t know if you’re going to have tomorrow. That’s just how I live my life now. There are times when I wonder why I was in the crash. I do believe there is a reason for everything. Why did we all get this second chance to live? I try to always think about that when I’m going through a hard time in my life. I think I didn’t live through that for this.

CL: It’s incredible that something so positive was a result. It gives you this weird advantage.

ME: Yes and even when I’m on a plane now I think there’s no way I could be in a crash twice and I’ve had some really crazy flights since then!

CL: Tell me about the book.

MD: Last year for Stacey’s birthday I gave her this book, Miracle on the Hudson. She had wanted to hear the whole story, so I went through and annotated it for her. I put funny little Post-It notes on the meaningful pages. It’s the only published material that every single person on the plane contributed to, which is why I did it. I had a weird thing about not wanting to do anything or capitalize on something like this. It’s a miracle we all lived and after the crash I remember watching all the video clips and everyone all over the news. They had everyone on Oprah and all these other news shows, and I was hesitant about that kind of attention. I wanted to be in the book to share my story, because they told me everyone who was on the plane was going to be in it. I would have something forever to read about it from everyone’s point of view. We all had a such a different experience to share.

CL: Your story is going to have an impact on so many people that read it. Of course all the people who take class with you are going to be blown away. Thank you so much for sharing this story!