Keep warm and toasty this winter with puffers for your feet! This collection of indoor/outdoor slippers can handle the elements, with traction and grip on the outside, and cozy insulation on the inside.

HUNTER IN/OUT INSULATED SLIPPER $90. Providing endless comfort without compromising on style, these slippers have a fold-down heel and an elasticated channel along the topline for an adjustable fit. They are certified vegan, and crafted from recycled nylon with a thermal insulating microfiber layer. Made for mountaineering, glacier glasses are designed to provide extra protection from the sun’s rays at altitude, intensified by extreme conditions. Their side shields keep the snow’s reflection out, and add a cool style element that have made them the sunglass of the season – even at sea level!

LEFT COLUMN: VON ZIPPER PSYCHWIG $220. The Psychwig reimagines classic glacier glasses for the modern adventurer — wherever they may travel. With their flat bridge, rounded base, and oversize lenses, they go from mountain towns to city streets with enhanced style appeal.

IZIPIZI GLACIER $80. Izipizi has created a line of cool and affordable sunglasses, which include glacier glasses too! In both a round and aviator design, and with a range of colors, they’ve got all the traditional features of a mountaineering frame with a chic everyday look.

JULBO VERMONT CLASSIC $149.95. Julbo has been making glacier glasses since 1888, time tested on such peaks such as Everest and K2. To celebrate their 125th anniversary, they have reissued the legendary Vermont Classic, their traditional mountaineering model with round lenses and leather side shields, in an array of fun and functional lens colors. END_OF_DOCUMENT_TOKEN_TO_BE_REPLACED

Bright In The Shades On the run, bike, and street… see the world in technicolor. Multi-colored sunshields are the look in sport and designer eyewear this fall.

KIck Off: Designer vs. Sport Sneakers Designer on the left, originals on the right… it’s easy to see where the inspiration comes from in fashion’s hottest sneakers. Sport classics vs. trendy trainers — take your pick in the battle of the kicks!
END_OF_DOCUMENT_TOKEN_TO_BE_REPLACED From deep seas, to motor speedways, to the moon and back, the chronograph watch has a long history of precise timekeeping for those whom every second counts. For the rest of us, they are the ultimate in style when it comes to a sports watch. Distinguished by their stopwatch design and functionality, with 3 dials that time elapsed seconds, minutes, and hours, plus a numbered bezel, there are endless variations as seen in this collection. Playful to refined, classic to modern, affordable to ultra luxe… we’ve got the chronograph for everyone and every budget: Training day to race day, get a boost from the max cushioning of the new fleet of running shoes. Don’t be fooled by their ultra comfort, these performance trainers are built for speed with energy returning technology, rocker design propulsion, and responsive cushioning every stride.

SAUCONY ENDORPHIN PRO 3 $225. Designed for speed with a carbon-fiber plate and max stack of cushioning, the Endorphin Pro 3 adds SPEEDROLL technology that propels you forward for the ultimate go-fast experience.

NIKE ZOOMX INVINCIBLE RUN FLYKNIT 2 $180. Responsive and lightweight Nike ZoomX foam is molded in a rocker shape, that provides support, cushioning, and flexibility throughout your stride. Wide, exaggerated shape at the forefoot and heel offers a more stable ride. END_OF_DOCUMENT_TOKEN_TO_BE_REPLACED By the pool, on the trail, in the garden these open air slides and sandals offer fun and functional style wherever summer takes you — and are made for the water too!

LEFT COLUMN: ADIDAS ADILETTE CLOG $35. From the pool to the street, keep the cool and comfy vibe going with these aerated adidas clogs. Based on the adidas pool slide, they’re made to get wet, and feature contoured footbeds for all day comfort.

HOKA HOPARA $135. For the outdoor adventurer, the Hopara can handle any terrain, wet or dry, with strategic cutouts for drainage and breathability, neoprene collar, and a rugged rubber outsole for traction.

UGG SPORT YEAH $60. Made with cushy molded water-resistant foam. the Sport Yeah is perfect for pool days, beach days, and summer days. It functions as a sandal or slide with a detachable, logo-print backstrap. END_OF_DOCUMENT_TOKEN_TO_BE_REPLACED Rugged but stylish, these versatile tote packs offer the convenience of a backpack with the style of a tote, and multiple modes of portage for your daily essentials.

ROW 1: OSPREY ARCANE TOTE PACK $110. The recycled Arcane Tote Pack is made from 13.5 plastic bottles. It features tuckaway tote and back straps, and built-in self-locking hook to keep essentials safe.

FJALLRAVEN VARDAG TOTE PACK $75. The Vardag is made from durable G-1000 HeavyDuty Eco S fabric with a reinforced base to stay upright. The roomy main compartment has a padded laptop sleeve, and quick-access pockets for other essentials.

THE NORTH FACE BOREALIS TOTE $79. This tote hybrid of the iconic Borealis backpack features a stand-up design with a padded laptop/tablet sleeve, internal organizational pockets, and bungee compression cords on front and sides.

ROW 2: MYSTERY RANCH MARKET 18L BACKPACK $74.95. This minimal tote pack is made from a soft but durable textured polyester. It features a foam back panel, interior and exterior zippered pockets, along with an upright water bottle sleeve inside.
END_OF_DOCUMENT_TOKEN_TO_BE_REPLACED The cable knit v-neck, sweater vest, maroon and navy palette, stripe trims… spring style takes its inspiration from the timeless looks of the tennis court, reinterpreting and reissuing the classics. ASOLO FALCON GV WOMEN $249.95. Durability, traction, and comfort combine to make the Falcon GV your ideal boot for summer hiking excursions and everyday outings. With its strong suede upper, reinforced toe cap, Gore-Tex® Extended Comfort lining, and Vibram MegaGrip rubber sole, the Falcon GV can scramble up rough terrain and then take to the streets all in breathable comfort.

DIEMME CIVETTA MENS $445. A lighter alternative to Diemme’s Everest Boot, the Civetta can take on mountain peeks with style for city streets. With tough nylon mesh and and suede uppers, a wraparound rubber waterguard, and Vibram® rubber outsoles, the Civetta provides stability and grip on any terrain, and wet weather protection. END_OF_DOCUMENT_TOKEN_TO_BE_REPLACED The new shoe on the street is the one you’ve been wearing at home. From Vuitton to Gucci to Balenciaga… slipper inspired sandals are the shoe for spring and the fuzz factor is high! From the car to the slopes, the campfire to the lodge, the couch to the gym… get where you need to go this winter in these puffy slip-ons — cozy for inside, rugged for outside.

LEFT COLUMN: ROSS & SNOW PUFF SCUFF $350. With a sneaker sole, real shearling wool lining, and bungee lacing system, these puff slip-ons will be your favorite go-to for checking the mail, walking the dog, or grabbing a coffee.

CHACO RAMBLE PUFF CINCH $74.95. Fireplace or campfire, the Ramble Puff Cinch slippers are made for indoors and outdoors with water resistant rip-stop nylon, soft fleece lining, and an adjustable, mid-ankle cinch in a stylish quilted design. SUPREME X THE NORTHFACE METALLIC BOREALIS BACKPACK $399. From the SS18 collaboration collection with The North Face and Supreme, this special edition of the iconic Borealis Backpack is still available on select resale sights like Stock-X and GOAT. END_OF_DOCUMENT_TOKEN_TO_BE_REPLACED you can’t go wrong with these tried and true canvas classics! Lightweight, breathable, and moisture-wicking… these protective face masks are designed for comfort and fit, from your workout through the rest of your day.

(Please note: these are not medical grade masks)

Made with high-performance fabrics, this water-resistant, anti-microbial mask is designed for sport and all-day wear. Structured design sits up off face and lips for added comfort and breathability. Iso-Chill fabric on interior lining and ear loops feels cool to the touch. END_OF_DOCUMENT_TOKEN_TO_BE_REPLACED

Sock It To Me! 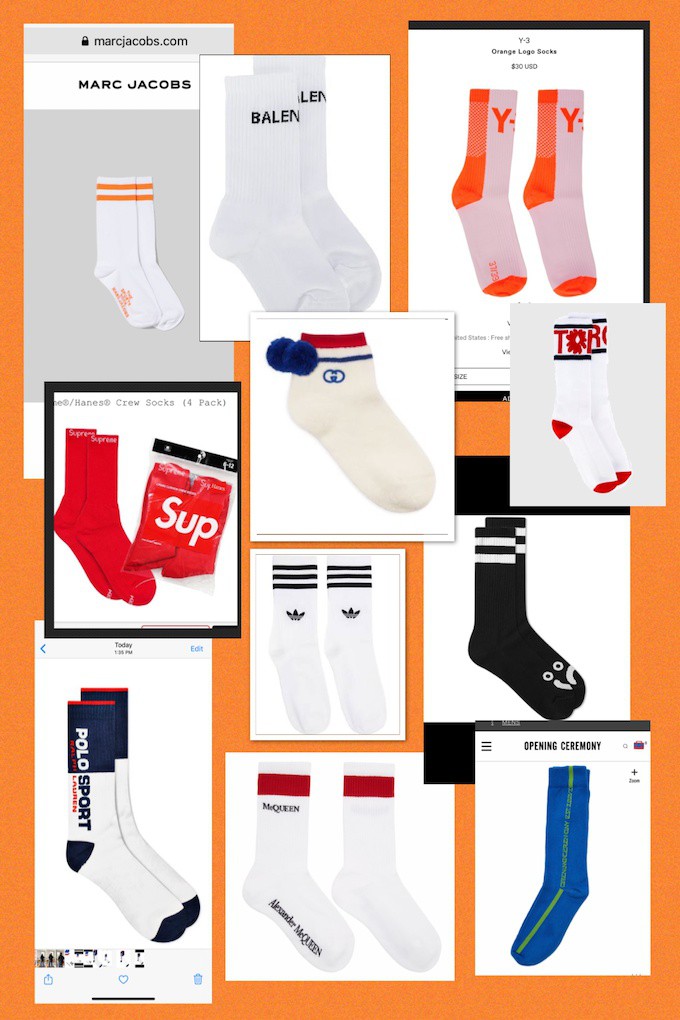 designers give the standard sweat sock their own playful twist! Plus the sporty favorites that are always in style! 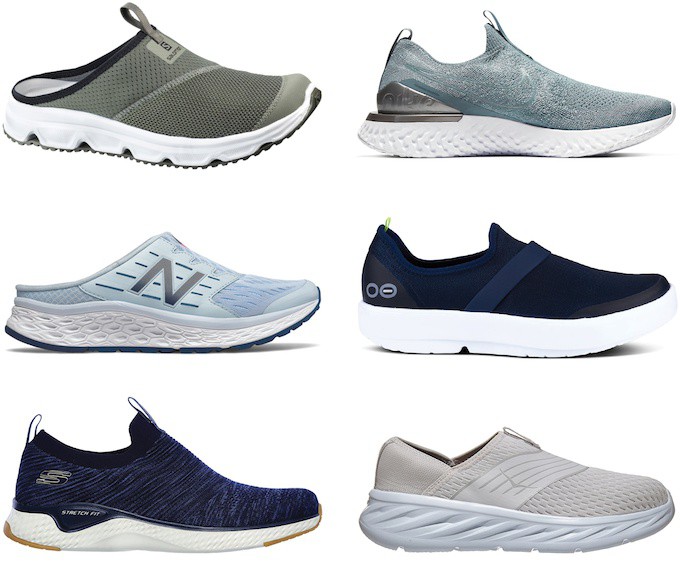 Show your feet some love after a tough workout and slide into a pair of these plush slip-ons. They’re perfect to and from the gym, as a recovery shoe, or even as a trainer (see which ones!) With ultra-comfort and all-day style, you may never want to take them off.

OOFOS 00mg LOW SHOE $139.95. Inside the cushy OOmg sole is revolutionary OOfoam™ that absorbs 37% more impact than traditional footwear foam. Reduce stress on feet and joints in a these recovery sneakers designed for all-day comfort and style.

HOKA ONE ONE ORA RECOVERY SHOE $80. Whether you’re recovering from a long run, spin class, or HIIT workout, these breathable, super-cushioned slip-ons will make your day. They’re great for travel too as they fold down and stash into carry-on. Production designer Stefan Beckman is highly sought-after by the world’s most prominent fashion brands, creating the sets and stages for such designers as Louis Vuitton, Tom Ford, Marc Jacobs, Coach, Tommy Hilfiger, and Bottega Veneta – just to name a few. Of note as well are his installations for adidas at Hypefest and ComplexCon — in addition to his editorial work for such publications as Vogue Italia, W, Love, and Interview.

Stefan’s latest project is one of his own creation, a home design line called Lateral Objects, which he has launched just in time for summer with a line of vibrant and sporty beach towels. It is just the first product in a series of home objects soon to come that will include beach umbrellas, glassware, trays, candles, matches, games, and more.

We caught up with Stefan to find out about his inspiration for Lateral Objects, as well as the hot summer pop-up he has curated, Heatwave, now open at Barney’s.

STYLE OF SPORT: How did Lateral Objects come to be?

STEFAN BECKMAN: I’ve always loved home design — furniture and accessories. I used to have a store in Soho called Property, and it just seemed like a natural thing for me to do. I love to challenge myself, and a lot of times I’ll take on projects I’ve never done. Maybe it works, maybe it doesn’t, but at least I’ve tried. I think the idea for the line is similar. It’s a broad category. I plan to do furniture and accessories, but if there is something interesting and inspiring to me, I can just do it.  END_OF_DOCUMENT_TOKEN_TO_BE_REPLACED Top rated sport eyewear brand and one of our favorites, Roka, recently launched their Rx line offering the same performance features and style in prescription frames as their sunglasses. Picking up on the Warby Parker model, now you can order up to four pairs of frames with Roka Home Try-On, and hang on them for a week. Glasses come with a pre-paid return label.

Super lightweight and durable, Roka prescription glasses come with the same anti-reflective, anti-scratch, anti-fog, and anti-grease coatings for which their sunglasses are known. With bendable titanium core wires to lock down fit, and their patented GEKO™ retention system, glasses stay in place no matter how sweaty you get and or how much you bounce around.

With 12 styles and multiple frame material options, just upload your prescription and voila — now you can look sporty and cool at the office or gym as you do on your bike or the tennis court! 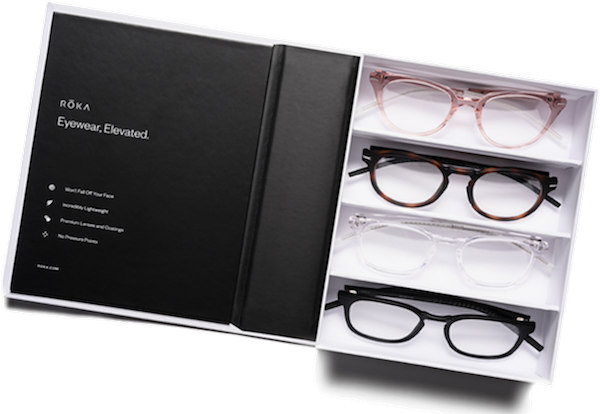