The Gift of Sport: Give Red on your list! From that hot skier to your chill surfer to the nature lover, we’ve got the full spectrum of great sporty gift ideas!

Red is the color of passion and fire — vibrant and exciting.

Give red to get hearts beating and pulses racing this Holiday season!

1. BLIZZARD BONAFIDE SKIS $699.95. Consistently ranked as one of the top all-mountain skis, for the hot skier who loves the powder of backside of the mountain as much as the groomers of the frontside, the Blizzard Bonafide handles it all with style and control.

2. OAKLEY FALL LINE XL PRISM REACT GOGGLES $299. Forget the forecast! With Oakley’s newest and by far hottest goggle, you can change your lens without changing your lens. With the push of a button lens tint adjusts with three settings: one for snowy and cloudy conditions, one for sunny days, or one for a mix of both. This is by far one of the hottest holiday gifts and goes on sale November 30!

3. ULTIMATE EARS WONDERBOOM PORTABLE BLUETOOTH SPEAKER $99.99. Indoors or out, this stylishly designed Bluetooth speaker channels crisp, bass-rich audio for up to 10 hours at a time. Use as a single speaker or connect several speakers for surround sound. Waterproof and buoyant, the Wonderboom is ideal for use around the pool and comes in lots more fab colors too. END_OF_DOCUMENT_TOKEN_TO_BE_REPLACED

The Gift of Sport: Go Green Green is the color of growth, health, and renewal.

For that nature lover and outdoor enthusiast…

with a full color spectrum of sporty gift ideas!

1. RUMPL PUFFY BLANKET $129. The Rumpl Puffy is constructed like a sleeping bag and made to go anywhere. Machine washable, packable, and lightweight, it uses a durable, water-repellent, ripstop nylon, and comes with its own stuff sack for easy transport. Shown here in “Old Growth”, the photograph is by Jeremy Koreski who we’ve featured on STYLE of SPORT.

3. BANG & OLUFSEN BEOPLAY A1 PORTABLE BLUETOOTH SPEAKER $250. Rugged but sleek, with crisp beautiful sound to match, the BeoPlay A1 is a palm-sized, portable Bluetooth speaker designed to go anywhere. With an aluminium sub-woofer for more powerful bass, it has a built-in microphone easy to switch over to phone calls or activate mobile features such as Apple Siri and Google Now. END_OF_DOCUMENT_TOKEN_TO_BE_REPLACED

The Gift of Sport: Get the Blues Blue is the shade of the sea and the sky,

known to be a peaceful and relaxing hue. For the cool, calm, and collected…

The SOS Gift Guides have something for everyone —

with a full color spectrum of the best sporty gift ideas!

1. GARY LINDEN X ST.FRANK SURFBOARD $1950. This Dark Indigo Vines longboard is one of four in a collection that unites legendary shaper Gary Linden of Linden Surfboards with the iconic textile designs of St. Frank. Surf it or hang it, this longboard can live on the water or on your walls.

2. CLEYTO REYES VELCRO TRAINING GLOVES $189. For training, sparring, and boxing workouts, these Cleyto Reyes training gloves can give and take a punch. Designed with the highest quality materials and craftsmanship, they are made to provide the best protection and comfort. Shown here in cool blue, they are available in all your favorite colors too!

3. PERFECT MOMENT OVERSIZED QUILTED DOWN JACKET $660. With that 70’s alpine style, Perfect Moment takes this plush oversized down jacket and cinches it with a playful rainbow belt for a look that’s hip – and warm! – on and off the slopes. END_OF_DOCUMENT_TOKEN_TO_BE_REPLACED In January of 2015, the world watched as two rock climbers became front page news. Tommy Caldwell and Kevin Jorgeson inched their way up the 3000 ft. Dawn Wall of El Capitan in Yosemite National Park, free-climbing its virtually sheer granite face for the first time in history. Using ropes only for safety, not for assistance, the two spent 19 days on the Dawn Wall in what many considered to be the greatest climb of all time.

A couple years later in June of 2017, world-renowned rock climber Alex Honnold free-soloed the Freerider route of El Capitan in a continuous ascent of 3 hours and 56 minutes — unobserved other than a film crew trailing him as he scaled the wall with no ropes at all. His death-defying climb is now considered one of greatest feats in the history of sport.

Two new films, The Dawn Wall and Free Solo document the pursuit of these climbs, the accomplishment of these unimaginable feats, and the unrelenting dedication and perseverance of their climbers. END_OF_DOCUMENT_TOKEN_TO_BE_REPLACED 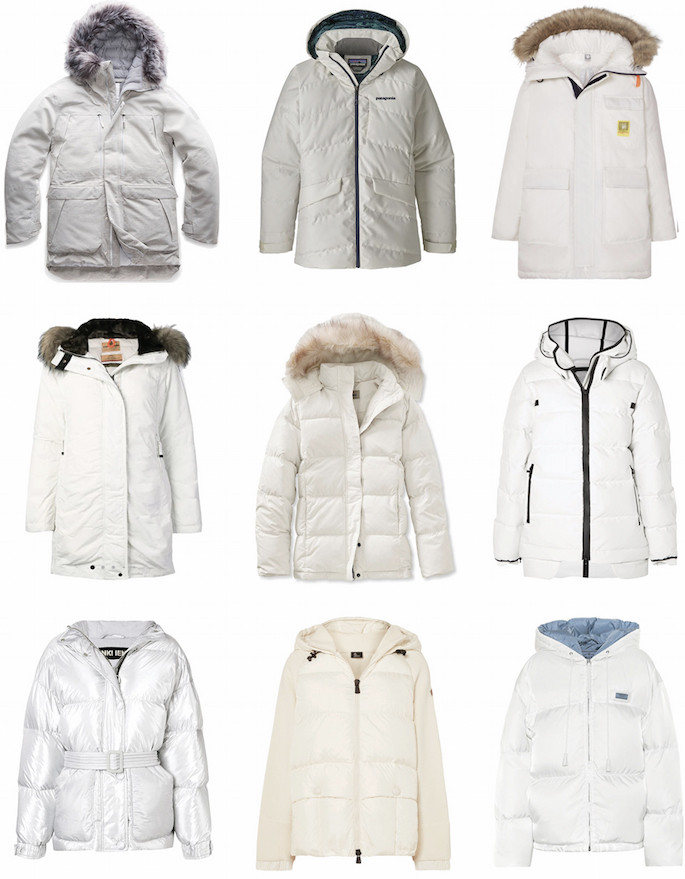 Take a walk on the white side…

in your super-warm and ultra-stylish down parka.

It’s the color of the season — if you dare keep it clean!

ROW 1: THE NORTH FACE MEN’S CRYOS EXPEDITION GTX PARKA $800. Warm and weatherproof, this rugged down parka is styled for the urban dweller. PATAGONIA WOMENS PIPE DOWN JACKET $349. A 700 fill-power recycled down jacket for all-day warmth and weather protection on and off the slopes; BRUMAL HOODED FAUX FUR-TRIMMED DOWN PARKA $1700.  A durable shell, removable faux fur-trimmed hood, and spacious interior pockets are just a few details that make this down parka one of this season’s fave.

ROW 2: PARAJUMPERS FUR HOODED DOWN PARKA $794. This Italian style down jacket features a button over front zip, a back slit at hem, and racoon fur trimmed hood; L.L.BEAN 650-FILL POWER DOWN JACKET $189. Even on the coldest winter days, this down jacket blankets in warm premium 650-fill-power down comfort. TEMPLA 3L QUILTED DOWN TECH-JERSEY COAT $1985. Made from a durable cotton-blend and tech-jersey, this parka features a removable snow skirt and internal collar for more urban style.

ROW 3: IENKI IENKI OVERSIZED DOWN QUILTED COAT $1425. This oversized silver white down jacket is crafted of metallic ripstop and designed with a hood and belted waist. MONCLER GRENOBLE QUILTED DOWN JACKET $1050. Snow-covered slopes or city streets, this toasty down jacket has the warmth and style for any winter locale. PRADA GABARDINE DOWN JACKET $2130. With an oversized silhouette and a cropped hem, this winter white down jacket has a contrasting baby-blue lining and matching Prada Etiquette appliqué. From olive greens to desert sands,

to look great in any locale.

ROW 2: SUUNTO ESSENTIAL DIGITAL WATCH $700. For the outdoor enthusiast, the Suunto Essential combines such functional features as an altimeter, barometer, and a compass — all in a ruggedly sophisticated timepiece. Here in a monochromatic moss tone, the Essential is hand-built from hard-wearing stainless steel and scratch-resistant sapphire crystal, completed with a durable nylon webbed band.  END_OF_DOCUMENT_TOKEN_TO_BE_REPLACED 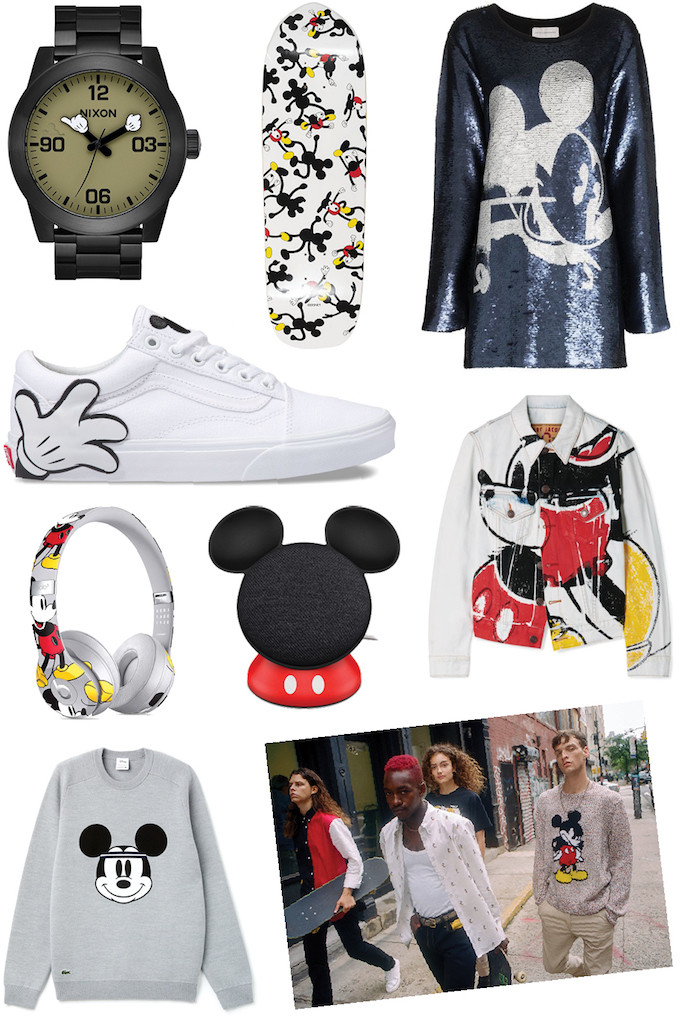 Mickey Mouse turns 90 on November 18th and the party has just gotten started… Everyone from Rag & Bone to Opening Ceremony to Vans, Terez, Lacoste, and more have collaborated with Disney on special Mickey 90th Anniversary collections to celebrate that sporty little mouse. Mickey: The True Original Exhibition opens in NYC on November 8th — an immersive 16,000 square-foot experience, featuring both historic and contemporary work from renowned artists, inspired by Mickey’s impact on the arts and creativity in all its forms. And we celebrate with this collection of Mickey favorites!

CLOCKWISE FROM TOP: NIXON CORPORAL SS 48 MM $225. Nixon Watches celebrates Mickey’s big birthday with the Mickey Mouse 90th Anniversary Collection. Shown above is the Corporal SS model with Mickey’s hands for the hour and minute, and his tail for seconds. It also features a Mickey detail embossed onto dial.

VANS VAULT MN MICKEY SKATE DECK / GEOFF MCFETRIDGE $85. A Vans Vault collaboration with Disney and renowned artist Geoff McFetridge, this Mickey Mouse skate deck was designed in celebration of Mickey’s 90th and is sure to become a collector’s item.

FAITH CONNEXION MICKEY SEQUIN BLOUSE $705. Mickey will take his cheese on a silver platter in this fabulous midnight blue and silver sequin Mickey embellished blouse — or dress for you hot Minnie’s! END_OF_DOCUMENT_TOKEN_TO_BE_REPLACED On Sunday, more than 50,000 runners will line up at the start of the 2018 New York City Marathon. For many it will be their first. No doubt they will spend Saturday night wondering what made them think this was a good idea, as a combination of excitement and panic make sleep impossible. I remember the pre-race jitters well, unable to imagine how I was actually going to run those 26.2 miles.

The NYC Marathon is an experience like no other. You are a rockstar for a day. The streets are lined with people cheering you on. For the thousands of visitors who have traveled here to run the Marathon, it’s the ultimate sightseeing trip. Even for us born and bred New Yorkers, you see the city in a whole new light. Bridges are behemoths – the Queensboro, monstrous.

A friend who is running for the first time asked for a few tips. He told me he was worried he had not trained enough. Here is what I told him… END_OF_DOCUMENT_TOKEN_TO_BE_REPLACED