Are These Beers Your New Sport Drink? Runners take your mark, get set, go, HAVE A BEER! Turns out your favorite brew might be the best sports drink around. But before you start getting hammered after your workouts, we’re talking non-alcoholic beer here. Refreshing and delicious, these brews are perfect accompaniment chilling on the beach or hitting the slopes, and as replenishing recovery fuel too.

Beer, as post workout beverage, has been marketed as of late to fitness enthusiasts — with craft brews like Sufferfest, whose tagline is “Will Sweat for Beer”, and Samuel Adams’ Boston 26.2 Brew, targeting athletes and weekend warriors. They are still alcoholic beverages, however, and not exactly healthy. Non-alcoholic beers are changing that, and gaining in popularity as a sports performance and recovery drink — thanks in large part to one of the active ingredients, malt.

Traditionally non-alcoholic beers have paled in flavor, compared to their alcoholic counterparts. Stripping the alcohol removes that beer flavor, and adding malt is what brings it back — along with all sorts of additional health benefits. Malt extract is rich in antioxidants, vitamins, minerals, and amino acids. Some of you will remember Ovaltine — the healthy malted milk beverage that was a staple of our childhoods — which is still widely consumed in Europe by both adults and children.

Peeyush Maheshwari, PhD, is the Founder and Principal of Food 4 Thought, with over 25 years of experience in the food industry at major companies like General Mills, Pillsbury, and Proctor & Gamble. Says Maheshwari, “Minus the alcohol, beer is actually a nutritious beverage, and this is where malt extract makes its mark.” The high antioxidant content in malt extract, in addition to the substantial amounts of polyphenols — plant compounds with anti-inflammatory properties — make non-alcoholic beer an ideal beverage for athletic recovery. 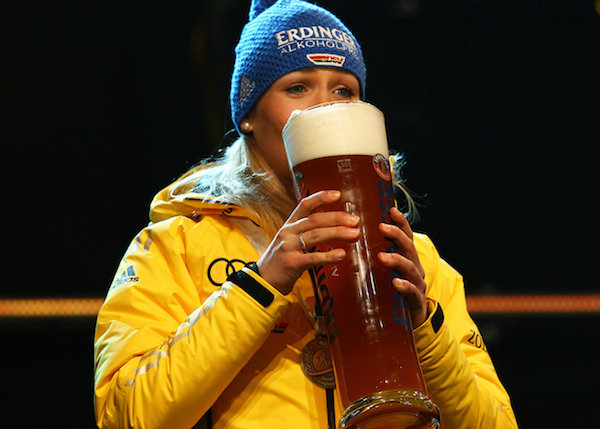 SWIGGING A COLD ONE POST-RACE

According to Maheshwari, while non-alcoholic beers are gaining traction in the United States as viable sports beverages, this burgeoning trend is already in full swing in other countries. Notably, it has become the beverage of choice for many Olympic athletes in Germany, after a 2012 study revealed that runners who drank non-alcoholic beer before and after the Munich Marathon reported less inflammation post-race than runners who drank a placebo.

Malt extract can also provide an energy boost. Malt contains Hordenine, a plant-based, naturally occurring nootropic compound that has been found in scientific studies to increase focus, energy, and motivation — but without the caffeine jitters. Hordenine is used in many dietary supplements for athletic performance and weight loss. Malt extract naturally contains this stimulant, but without added or artificial ingredients.

While non-alcoholic beer boasts all these health and performance benefits, and many are now being marketed as sports recovery drinks, not all rank equally in the taste department. From established European brands, to local craft breweries, here 10 popular favorites you fit and active beer connoisseurs will enjoy — particularly after crushing that workout:

German brewed Krombacher Alkoholfrei is a burnt gold pilsner that lies on the sweeter side, with aromas of light honey and hay. On the palette, herbal hops kick in and remain a subtle backing note from start to finish.

Athletic Brewing Company has a major lineup of non-alcoholic brews that include IPAs, lagers, wheat, golden brews, and this re-release of their summer special Laird Superfood Superfood Swell. Inspired by Laird Superfood, this tropical IPA has flavorful notes of mango, pineapple, coconut taste-bending brew that transport you to Hawaii’s shores.

Erdinger Weissbier is like a hefeweizen, but a bit sweeter. With a full hoppy flavor, hints of cloves and citrus, it’s got the carbonation of a traditional brew, and a frothy head to match.

As one of the few non-alcoholic IPAs, this Dutch craft beer is made with a brigade of specialty malts for a rich hoppy taste with a bitter and citrusy finish. Try their Hellraiser Dark Amber for a heartier brew.

From the Danish brewery, Mikkeller Energibajer has notes of peach, grapefruit, and apricot — a refreshing pick-me-up after a workout. The beer is light bodied and golden in color with the frothy head of a regular brew.

If you’re a Heineken lover, Heineken 0.0 is for you. Very popular in Europe, Heineken 0.0 recently launched here in the US, and many say they can’t tell the difference between the non-alcoholic and regular Heineken.

Schneider Weisse Mein Alkoholfrei is the only hand-crafted wheat beer on the market. Its got a rich flavor, with a strong reddish color and fine white, long-lasting head.

Brewed in Germany, Clausthaler only makes non-alcoholic beer, and is consistently the most awarded. With a malty aroma of grains and barley, the taste is sweet and earthy with a hoppy finish. It’s available in refreshing flavors like Lemon, a richer dark Dry Hopped, and craft style favorite Unfiltered.

From the oldest brewery in the world — it dates back to 1040! — Weihenstephaner Hefeweissbier Alkoholfrei tastes like a hefeweizen, with popular lemon and wheat flavors that are tangy, fresh, and full-bodied, along with hints of cloves and honey.