In January of 2015, the world watched as two rock climbers became front page news. Tommy Caldwell and Kevin Jorgeson inched their way up the 3000 ft. Dawn Wall of El Capitan in Yosemite National Park, free-climbing its virtually sheer granite face for the first time in history. Using ropes only for safety, not for assistance, the two spent 19 days on the Dawn Wall in what many considered to be the greatest climb of all time.

A couple years later in June of 2017, world-renowned rock climber Alex Honnold free-soloed the Freerider route of El Capitan in a continuous ascent of 3 hours and 56 minutes — unobserved other than a film crew trailing him as he scaled the wall with no ropes at all. His death-defying climb is now considered one of greatest feats in the history of sport.

Two new films, The Dawn Wall and Free Solo document the pursuit of these climbs, the accomplishment of these unimaginable feats, and the unrelenting dedication and perseverance of their climbers. 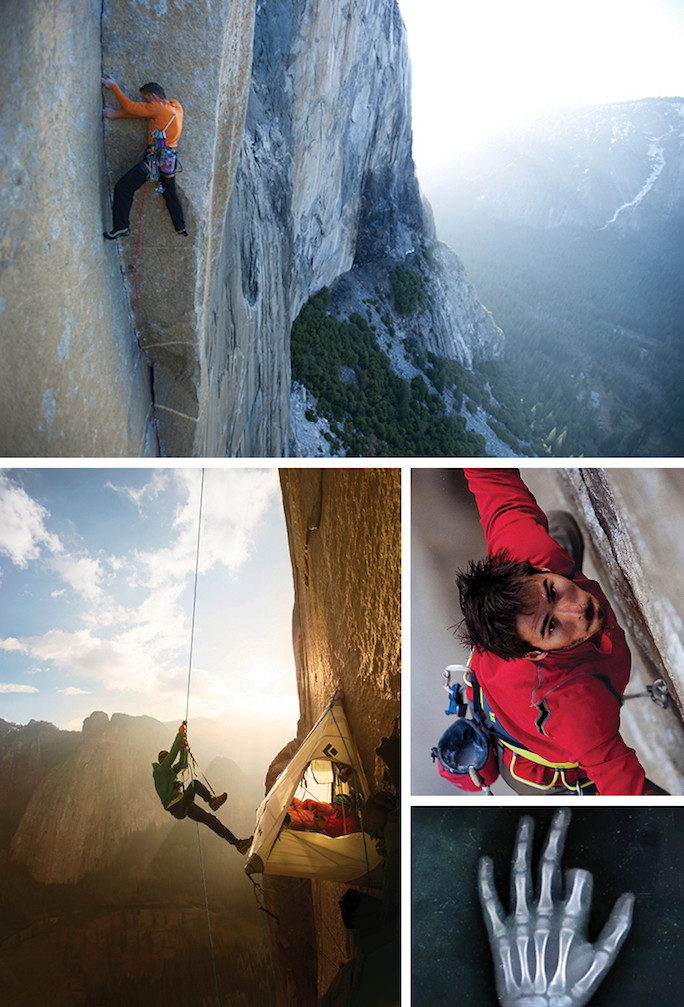 The Dawn Wall tells the story primarily of Tommy Caldwell, a climber who gained worldwide notoriety at the age of 22 in an event many will remember. Taken hostage by rebels in the mountains Kyrgyzstan, along with 3 other Americans with whom he was climbing, Caldwell was able to push his captor off a cliff in a plan they crafted to escape. Changed forever by the event, he turned to the walls of Yosemite to escape his devastation. 1 year later in a construction accident, he sliced his finger off with a saw.

Unbelievably, Caldwell returned to climbing missing an index finger and somehow even stronger than before. It was the pain of his marriage later falling apart that turned out to be the most overwhelming, which he escaped by fixating on the extraordinary goal of free-climbing the Dawn Wall. The meticulous planning and practicing of routes would take 6 years, requiring a partner that Caldwell surprisingly found Kevin Jorgeson. A top climber — but one who excelled at bouldering, not big wall climbing – Jorgeson had heard about Caldwell’s plan and contacted him to see if he might need a partner. With no other options, Caldwell invited him to Yosemite.

For any climber Yosemite is the mecca, and El Capitan the crown jewel. Many of its routes have been climbed, but never the Dawn Wall due to the sheer magnitude of blank rock. It gets progressively more difficult as you ascend – the pitches steeper, and cracks smaller. The film cuts between Caldwell’s backstory and the Dawn Wall climb – a big part of which is how the climb itself became front page news. Picked up by the The New York Times, it ignited a frenzy of global media attention. 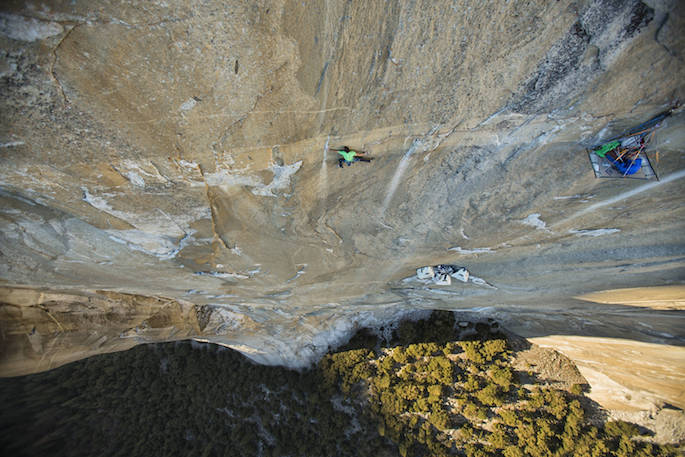 KEVIN JORGESON ON THE DAWN WALL

Camping in portaledge tents, Caldwell and Jorgeson spent 19 days on the Dawn Wall, tackling its 32 pitches, each one a world class challenge in itself. Both climbers had to complete each pitch before moving on. The New York Times picked up the story in the midst of Jorgeson’s week-long struggle to complete the 15th pitch — a drama for both as time went on. Caldwell had to ultimately decide whether to wait for his partner or move on without him.

We all know what happened but regardless The Dawn Wall is a completely riveting telling of the story. The climb is described like a moon landing, with TV trucks stationed at the bottom of the wall as crowds gathered, fans and media awaiting their arrival at the top. The film mesmerizes at it captures the physical and emotional journey of these climbers and a very personal story that enthralled the world as it became front page news. 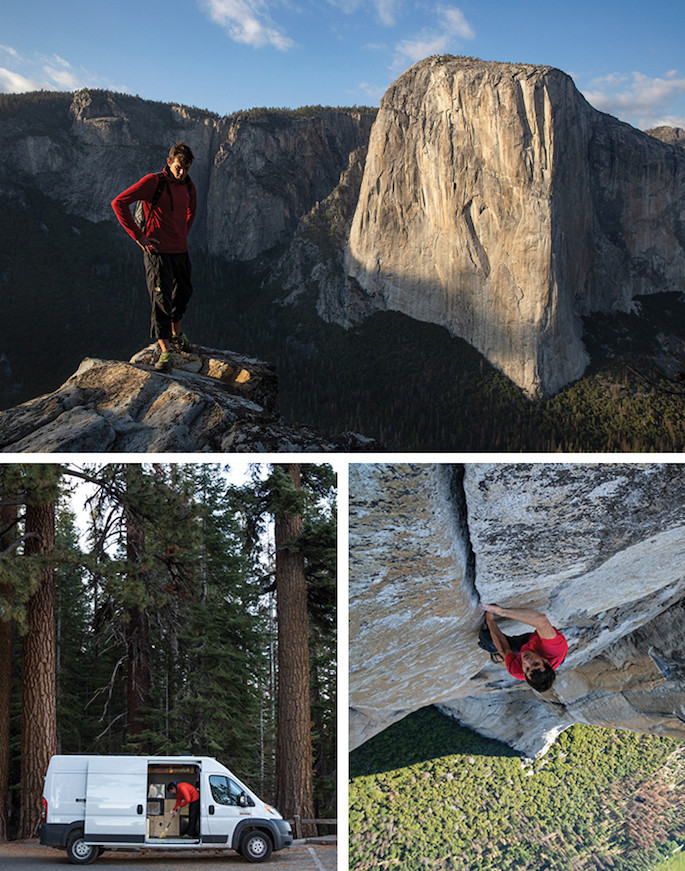 Unlike The Dawn Wall, the film Free Solo, was conceived as part of Alex Honnold’s unfathomable no-ropes climb of El Capitan. The documentation itself is a part of the film as we watch the filmmakers wrestle with ethical quandary of covering the possible death of their subject and friend should he make even one mistake. Whereas Caldwell and Jorgeson climbed the Dawn Wall unassisted, they had ropes to catch them if they fell. For Honnold in Free Solo there is no margin for error. A fall equals death which makes for an edge of your seat thriller from start to finish.

Honnold is considered the world’s greatest climber and free-soloer. He has been featured on the covers of National Geographic, New York Times Magazine, and Outside, in addition to a 60 Minute profile. His noted lack of fear has allowed him to free solo many climbs most would never even consider. A brain scan during the film in fact reveals that in his brain simply does not respond to stimulation that would terrify most of us. “Anybody could conceivably die on any given day,” says Honnold. “Soloing just makes it far more immediate.”

We watch him go through the painstaking preparation of the climb for a year, analyzing every crack and practicing every move with ropes – similar to Caldwell and Jorgeson  – so that when the time comes to make the climb without ropes, he is so well rehearsed there is no fear and there are no mistakes. Caldwell in fact makes an appearance in the film, climbing with him in practice. “People who know a little bit about climbing are like, ‘Oh, he’s totally safe”, reveals Caldwell. “People who really know exactly what he’s doing are freaked out” 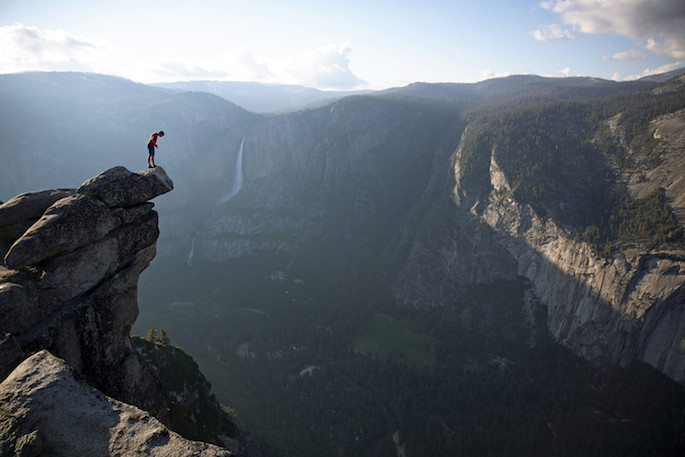 A quirky but honest and endearing character, Honnold has made climbing his solitary focus most of his life, notably living in his van in Yosemite for 9 years. With the introduction of a girlfriend into the picture we see a more personal side of this single-minded climber. The candid scenes between the two reveal the emotional challenge for both in a relationship where death is a very possible outcome for doing what makes you happy.

When the day of the climb comes you almost can’t watch even though we know he triumphs. The cameramen can barely look through the viewfinder. Honnold’s success seems unfathomable, yet he makes it look effortless, even on pitches we have watched him struggle with over and over in practice. Breathtakingly filmed, like The Dawn Wall, Free Solo pays homage not just Honnold but to the beauty and allure of Yosemite that entices the world’s greatest climbers, and beckons one to scale it without ropes.