2018 US Open Women’s Final: One Not Soon Forgotten I rarely write those front-page sport stories that everyone covers, because I don’t know what else to add that hasn’t been said. It’s been 24 hours since Naomi Osaka beat Serena Williams in the Women’s Final at the 2018 US Open however, and I’m still reeling with conflicting emotions about the match. This is much more than a sport story. The victory of a first-time Grand Slam finalist against the best women’s player of all time should have been a celebration. Osaka won in straight sets, 6-2, 6-4, but the events that occurred in the second set leading to that final score are ones we will be talking about for many tennis championships to come.

Tennis is a game of momentum. You watch it shift back and forth like the ball across the net. A first set win in a Grand Slam final by a first-time finalist like Naomi Osaka, often precedes a second set loss, and a 3-set win for a veteran like Serena Williams. In her 23 Grand Slam victories, she’s done it many times before. Most young players falter under the pressure in such a big match. Osaka did not. But Williams did. She lost it — and I’m not talking about the match. She lost IT in an on-court meltdown that was not unwarranted, but was unsportsmanlike.

In the second game of the second set, Serena William’s coach Patrick Mouratoglou made a hand gesture to his player that seemed to suggest she come up to the net. Coaching from the stands is not permitted, and though Serena swore to the umpire that was not the case (it appears she wasn’t even looking in his direction), a code violation was called by Carlos Ramos that resulted in a warning. Taking offense at what Williams perceived as being accused of cheating, her response was, “I don’t cheat to win. I’d rather lose.” The heated exchange seemed to get her fired up. She went back on court to win her service game, and then break Osaka in the next to take a 3-1 lead in the second set. She had the momentum back. 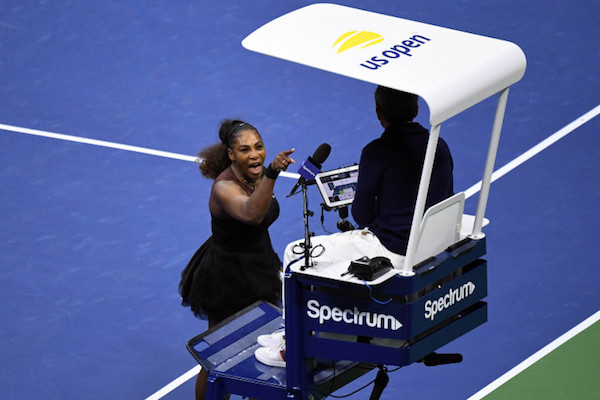 But Osaka broke her right back. Double faulting twice, Williams smashed her racket in frustration at the end of the game. Another code violation was called by Ramos and the penalty this time was a point. Osaka would start the next game up 15-0. Now Williams was really incensed demanding Ramos apologize. When the next changeover came at 4-3 with Osaka leading, Williams called Ramos a “thief” for stealing a point from her. And with that he robbed her of a game as a penalty for her third code violation. The score was now 5-3.

Neither Serena or the crowd would stand for it. As she ranted on the court about how unfair this was, arguing that male players routinely behave in the same manner without facing penalties, the crowd began to yell and boo in support. It became a protest for women’s rights. She continued to the point of tears, bringing the tournament referee, Brian Earley, and the Grand Slam supervisor, Donna Kelso on to the court to no avail.

Meanwhile across the net, up 5-3 and waiting to serve for the championship, Osaka tried to maintain her focus amidst these unprecedented distractions. Though Serena was right, her behavior in that moment was wrong. IT was unfair, and it was disrespectful to her opponent. Osaka was able to block it out, but the distraction proved too much for the distractor. Williams would lose the second set 6-4, the match, and the championship.

What I love about sports is they are so much more than a game. At a Grand Slam final you sometimes forget it’s just two people battling their hearts out to win a championship on a massive world wide stage. We watch as dreams come true — dreams where a 20-year-old tennis player takes on her idol, the legend that is Serena Williams, at the final of the US Open. You watch the tears of joy when she wins. But these were tears of sadness and Osaka’s dream became a nightmare as the crowd booed at the outcome and the events that gave her one point and a game in the victory. 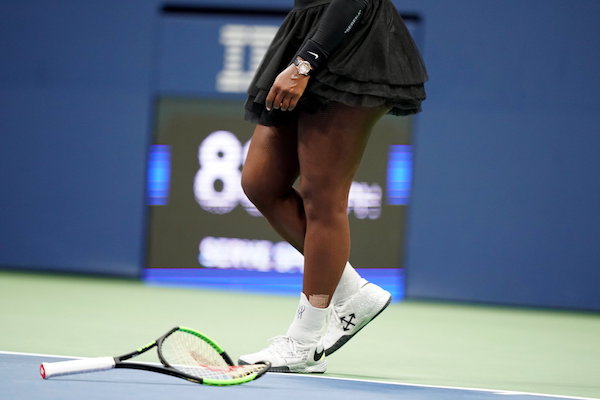 Since giving birth to her daughter Alexis Olympia, Serena Williams has become a larger than life figure. Her comeback as a mom returning to professional tennis has taken on mythic proportions. The subject of an HBO documentary series, on the cover of Vogue, filling every commercial break of the US Open with the same three endlessly running ads… you’d think she was the first athlete to ever give birth. Yes, she faced major health complications, the severity of which I don’t overlook, but Kim Clijsters won the US Open two years in a row in 2009 and 2010 as a first time mom, and with hardly the fanfare.

I love watching Serena Williams play tennis. I’ve been thrilled to have her back on the courts, but have become a little Serena-ed out. I’ll confess I was rooting for Osaka in the final. She had a great tournament, beat last year’s winner in the semi-final, and had a breakout 2018 season. I was rooting for her even more after Williams’s outburst, even though I hate the rules that punish a player for being emotional. It’s ridiculous — especially at a Grand Slam final. So is the fact that coaches give signals to their players all the time from the stands and it often goes unpunished. It is unfair. Don’t even get me started on the female player that was penalized for changing her shirt on court during a match at this year’s US Open when guys do it all the time. Serena is right. The rules ARE sexist.

Serena has been the obvious crowd favorite at the US Open, with cheers for her roaring through the stands at a deafening volume. But those crowds destroyed Naomi Osaka’s first Grand Slam victory. As they continued to boo at the trophy presentation, they robbed Osaka of what should have been a joyous celebration.

It was in that moment however, the momentum changed again, and changed for good. Williams demonstrated the superwoman status bestowed upon her coming to the defense of her opponent. As both players stood there unable to hold back their tears, Williams put her arm around Osaka’s shoulder to comfort her. Accepting her runners-up trophy, Williams tamed the angry mob and asked the crowd to stop booing. She requested this be a moment celebration for Osaka, reminding them it was her first Grand Slam win.

Ironically, it was in defeat that Serena Williams ultimately proved what a true champion she is, an inspiring role model… and a great mom. She won me back too.