Fashion designer Cynthia Rowley loves to surf. She is admittedly obsessed, as most hard core surfers are. It’s a shared family passion with husband Bill, and their two daughters Kit, 20, and Gigi, 14 — spending summer and fall weekends surfing in Montauk, and vacations in such far-flung surf locales as Costa Rica, Mexico, Hong Kong, and Senegal.

Cynthia’s style on the waves is cool and graceful, with an easy flow befitting the fashion design for which she is known. She started surfing about 20 years ago, trading a big house in East Hampton for a little shack on the beach in Montauk. A friend and local surfer told her she couldn’t live in that house if she didn’t surf. He paddled her out the next day and she popped right up on the first wave. She was hooked.

I joined Cynthia and daughter Kit for a surf session last weekend in Montauk for our latest installment of W.O.W! Working Out With, having as much fun on the mushy waves of a rainy Saturday, as the perfect ones of a sunny Sunday. Kit is following in her mother’s – and father’s – footsteps with her own fashion line. The three of us chatted about their shared love of surfing and fashion — and what’s coming down the pipeline for both… 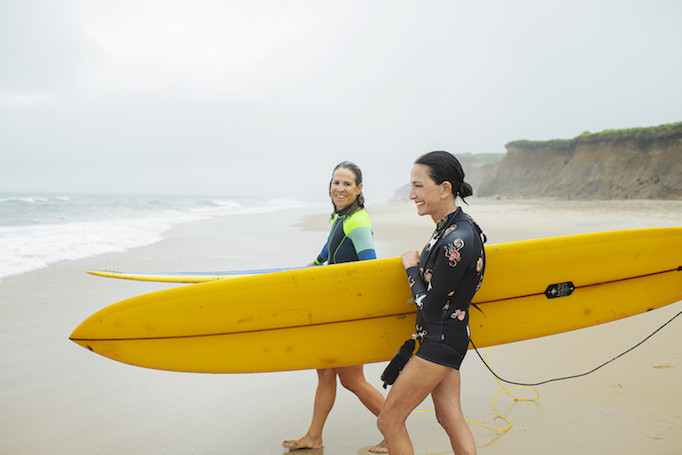 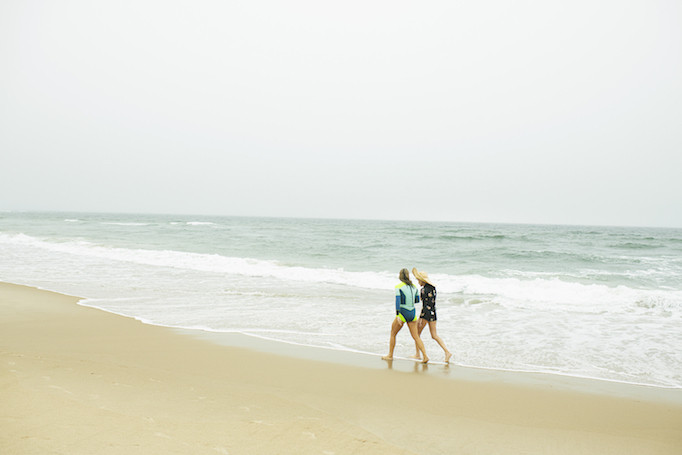 YOUR EDITOR WITH CYNTHIA ROWLEY IN MONTAUK

STYLE OF SPORT: So Cynthia, how did you get into surfing?

CYNTHIA ROWLEY: I started about 20 years ago. I had a big house in East Hampton where I have a store. I found all I was doing all day was washing towels for friends that were crashing at my house. I was like, ‘I just want a little shack on the beach in Montauk.’ I drove out here and found the perfect house – 480 square feet. It was mostly gnarly old surfer dudes then.

SOS: Yeah… that’s when Montauk was still chill. There was no Surf Lodge – just surfers.

CR: A friend and local surfer gave me a board and took me out to Ditch Plains. He said, “I’m going to tell you when the wave is coming. You gotta paddle like you’ve never paddled. When you feel the wave really starting to push you, that’s when you stand up.” I remember him yelling, “PADDLE, PADDLE, PADDLE!” And then he yelled, “POP UP!” And I stinkin’ did it!

SOS: So you were a natural?

CR: I think he was a good teacher.

SOS: I think you were a natural…

CR: It was a short ride, but I turned around and all the guys in the water were cheering for me. It changed my life. From that point on I was hooked. Surfing makes me feel so good. I’m in the water. I’m with Mother Nature. You’re not in control of anything. You have to be in the moment. It’s just a very meditative, beautiful thing.

SOS: And it’s become a lifestyle for you since then. CR: All my friends are here, and we all surf together. We’re out there on the water and it’s a community. We’re all cheering each other on and it’s just such a happy place.

CR: It’s all I want to talk about – where I’ve been, where you’ve been, the places to go.

SOS: So then what are some of your favorite surf spots – besides here?

CR: Well, you know you’re never supposed to say because you don’t want them to get too crowded, but I will tell you that for a quick getaway I love Rincon in Puerto Rico. I also love Mexico and Costa Rica. I’ve surfed in Hong Kong at a place called Big Wave Bay, and in Senegal. We’re going to Byron Bay, Australia this Christmas.

SOS: How does surfing give you inspiration for your work and design?

CR: It just gives me peace and happiness so I can be inspired. I also like mixing business with pleasure – like designing wetsuits.

SOS: So that’s a perfect segue… when and how did you start designing these sexy wetsuits we’re all wearing?

CR: I was surfing at Ditch about 9 years ago and a guy paddled up to me. “Hey”, he said, “I know you. You’re that designer and you surf. That’s amazing. I have surfers trying to design my stuff and it would be way better the other way around!” It turned out he was the marketing guru behind Roxy, Randy Hild – and we ended up doing a collaboration!

SOS: I remember this now — Cynthia Rowley for Roxy! 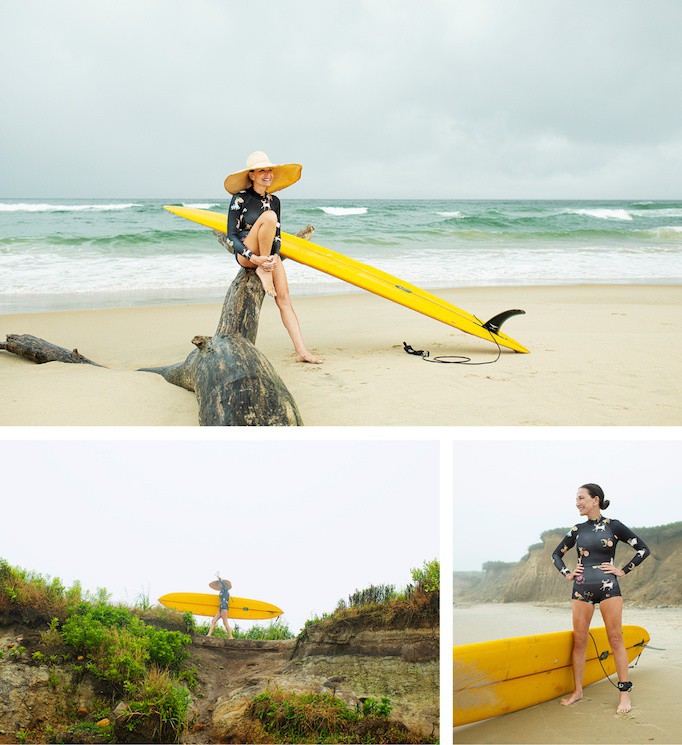 CR: It gets even better. So I started designing for them, and we launched with a world tour — first at Barneys in New York, then Colette in Paris, where we had all the windows. Then Tokyo and Sidney. We were selling tons of wetsuits, but I wanted to start doing prints which Roxy/Quiksilver didn’t think was possible. I decided to figure it out because I had to print on a wetsuit. I sent a design to my printer in Italy, and then to the factory in China to have made into a wetsuit, but it made them complicated and expensive. In the end Quiksilver gave me their factory, resources, and set me up. They were like, ‘Here you go… go with God’. That’s how it all happened.

SOS: And you’re still producing them – with that iconic boyshort cut – and in so many different cool patterns and graphics! You were one of the first fashion designers to do a sport line, way before it was this huge booming category. You really were one of the pioneers of athleisure – or “surf-leisure”!

CR: Fashion and function and where they meet is so authentic to my lifestyle – it’s how I dress. I love the idea of always mixing sport with fashion. It has just been a natural thing for me to do. Even when you’re doing a sport, it’s with high style. Right now we have our collaboration with Impala Rollerskates in store. For our show last September, the concept was being all dressed up, but if something fun was happening, you’d just go out and do it! I cast 20 pro rollerskate girls of all ages (up to 70!), shapes, sizes, and diverse backgrounds. It was based in my garage where we had bleachers set up. We closed the street, and people lined up to watch. The music started and the girls came barreling down Morton Street in floaty dresses and rollerskates. They came into the garage where they performed, and then skated off down the street. (Check it out HERE!)

SOS: That sounds amazing! I know you have some other cool sport collaborations in the works too. Can you tell us about those? CR: First there is a collaboration with Danner boots, and then we’re doing waterproof watches with Timex that are coming in February.

SOS: We are obsessed with both brands at Style of Sport! And what can we expect to see coming down the runway in September? Any inspiration for Spring 2020 you want to share?

CR: Do you know the book Oh, the Places You’ll Go by Dr. Suess?

SOS: I love that book… and it’s so perfect for surfing!

SOS: So Kit let me turn my attention to you. You’ve gotten into fashion design as well I hear — with inspiration from both your mom and your dad. Tell us about your line.

KIT KEENAN : I started my company KIT last summer. It is split into two parts. One is artist collaborations, where we do streetwear with artist prints. That’s where the influence comes from my dad. He is a gallerist (Bill Powers) and has taught me everything I know about the art world. Our first collaboration was with Richard Prince, and then we did another with Marc Grosjean, an LA-based artist. The next one is going to be with Vaughn Spann, who has an upcoming show in Japan at Murakami’s gallery. 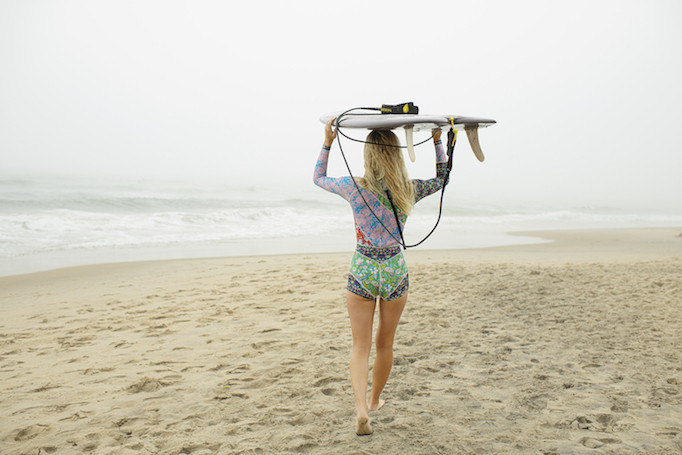 SOS: When does that launch?

KK: At the end of the summer.

SOS: And what are you printing these artworks on?

KIT: Mostly hoodies and t-shirts — streetwear stuff — which I think is cool because it brings the art world, which can be very exclusive, to a younger audience and people my age. The other side of the brand is women’s ready-to-wear. That is more classically influenced by my mom. It represents two sides of my style as well. Sometimes I want to throw on a pretty dress and heels, but most of the time I’m in workout clothes or streetwear. It’s very representative of my life and my family.

SOS: I know that surfing is a family passion. I’d love to hear how you got started.

KK: My parents tried to get me in the water and surf when I was really young. Every summer they’d drag me in, kicking and screaming, but I was not into it until I was about 10.

SOS: That’s still pretty young! And how did your sister get started?

KK: She’s 5 years younger than me and had watched us surfing her whole life, so she was more open to the sport than I was. Now that we all surf, we love it as a family. No matter what’s going on, we all paddle out. No phones, no nothing. No work on our minds. Just all of us surfing together, stealing each other’s waves, and having the best time.

SOS: And you’ll be able to share this your whole lives. It’s just amazing. Well, thanks so much ladies! Looking forward to seeing what both of you have in store for fall! 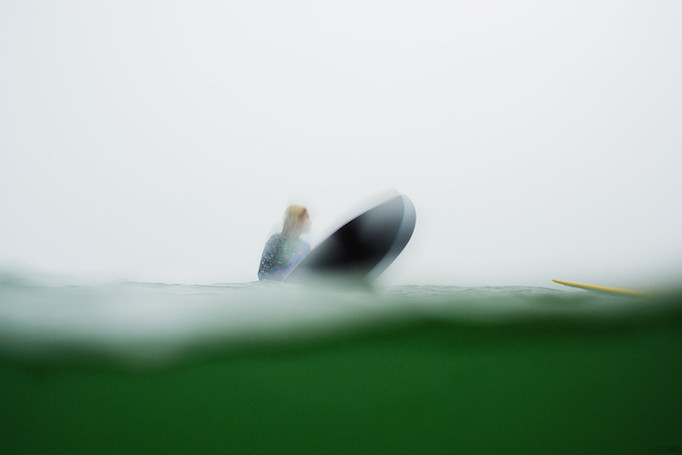 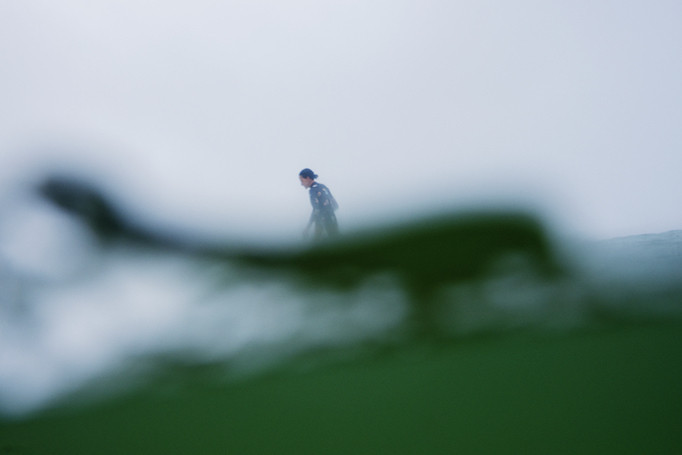