Best of The Box Walking around New York City these days it’s not unusal to see a pair of boxing gloves draped over the shoulder of a fashionably dressed woman. Check out Instagram and you’ll see many a fashion model punching it out with her trainer in sweaty style. From the spa-like Shadowbox, to the speakeasy grungy Overthrow, to long established boxing gyms like Gleasons in Brooklyn — boxing is the hottest workout in town.

Fighters are known for their fitness and ripped physiques. Not only does boxing tone muscles and build full body strength, but it’s a major cardio workout, as anyone who has jump roped or hit the heavy bag for 3 minutes straight can attest. Just one boxing class can burn up to a thousand calories. It’s a sport that requires not just physical but mental discipline as well. Putting together a series of jab-hook-cross-upper cut combinations while bobbing and weaving requires intense focus and concentration, in addition to muscular and cardiovascular strength.

Boxing classes feature a mix of calisthenics like squats, lunges, and jumping jacks; good old fashioned sit-ups and other ab work; jump rope, shadowboxing, mitt and heavy bag work. Choosing a boxing gym comes down to whether want to actually fight or just train like you do. Do you want designer chic or a “Rocky” style gym? Whether you’re looking to rule the ring or just blow off some steam, we’ve got your guide to all the hottest fight clubs around. 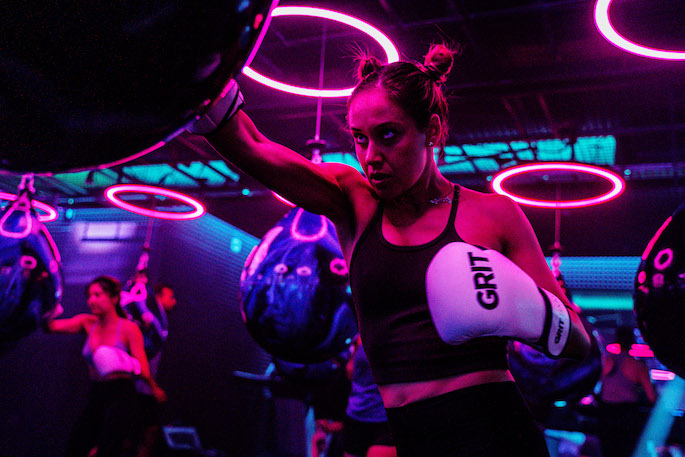 The latest entry into the boutique boxing studio scene is GRIT BXNG – a Rumble meets Barry’s Bootcamp hybrid that combines boxing, treadmill, and strength training intervals into an action-packed 50-minute workout! Founded by Pitbull (hip-hop superstar), Tony Robbins (renowned motivational speaker), and Bill Zanker (Founder of The Learning Annex), this is fitness Vegas-style, with a multi-million dollar music and lighting system — along with a full liquor bar for post-workout cocktails and mocktails! “Home of Underground Boxing”, the recently opened Overthrow feels more fightclub than fitness studio, and in fact the space is a former afterhours club and meeting spot for radical activists. Dimly lit with red hues, class at 7:30 am had a been-up-all-night vibe, but packed a punch. Classes are taught by pro and top amateur fighters, who put an emphasis on proper form. The 45 minute Boxing Burnout Class incorporates basic boxing technique, shadowboxing, heavy bag work, set to club thumping, heart pumping music.

Whereas many boxing gyms train you like a real fighter, Shadowbox takes a fitness only approach, and the design of the space is like a boxing spa. Opened last spring, this street level studio offers daily heavy bag classes in a cool dim blue room hung with 40 bags. There is private training as well in a vintage whitewashed ring flooded with natural light. Workouts consist of intense shadowboxing and guided heavy bag work, interval training and body weight exercises, paired with high-energy music for a grueling full body workout. A ringside café serves Intelligentsia Coffee and Kilogram Tea, as well as fresh designer juices. The locker rooms feature full-service amenities and complimentary toiletries by C.O. Bigelow Apothecaries. 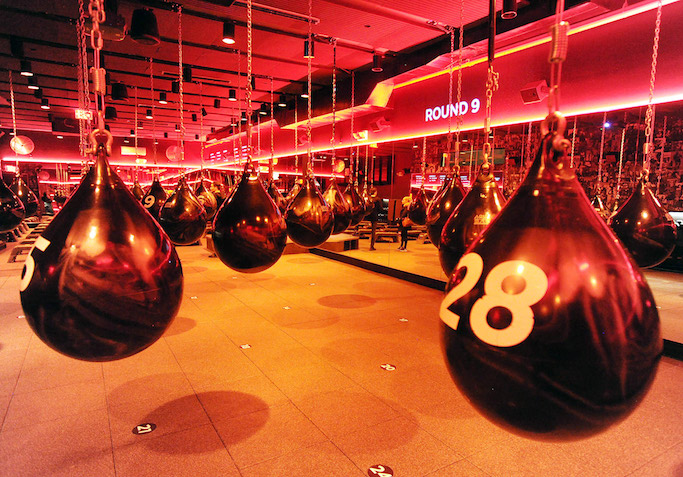 “Let’s get ready tooooo…. RUMBLE!” The hottest addition to the NYC and LA boxing fitness scene is Rumble. It’s a boxing meets Barry’s Bootcamp HIIT workout, but instead of a treadmill intervals there are rounds of different jab, cross, hook, uppercut punch combinations on Rumble’s unique water-filled, teardrop-style boxing bags. The bags are rubber, so instead of absorbing your punches, there is a nice kick back. Rumble is urban chic meets street style from the nightclub lit studio; to the all white boxing gloves and Keith Haring inspired graphics on wraps; to the Basquiat in the lobby; to the black and white photographs of boxing and Hollywood legends that plaster the walls. You are only as good as your workout however, and Rumble knocked me out with this sweaty, fun and high powered class.

The original NYC boxing gym and the oldest in the USA, Gleasons has been around since 1937 and where such legendary champions as Muhammad Ali, Mike Tyson, Sugar Ray Robinson have trained, as well as Hilary Swank for her Academy Award winning role in “Million Dollar Baby.” Located in Dumbo, right under the Brooklyn Bridge, this no frills, real deal facilty offers primarily one-on-one training to both pros and regular folks alike. There are three full size boxing rings, and one full size wrestling ring, hanging bags of varying sizes, double end bags and uppercut bags. A selection of cardio equipment is also available for use including treadmills, steppers, rowers and stationery bikes, in addition to an assortment of free weights. A favorite among such top models as Gigi Hadid, Kendall Jenner, Cara Delevingne to name a few, Gotham Gym is one of the hottest of the newer boxing facilities. Their motto is “Train Like A Fighter”, and the gym offers daily classes focused on boxing fundamentals and conditioning, as well as private instruction, to make sure people do. Small group classes take place in the ring, starting with a series of intense warm up exercises and cooling down with core work. In between, students pair up, focusing on mitt work from both sides of the glove. Surprisingly providing the moving target for your partners punches is as much of a workout as hitting itself! 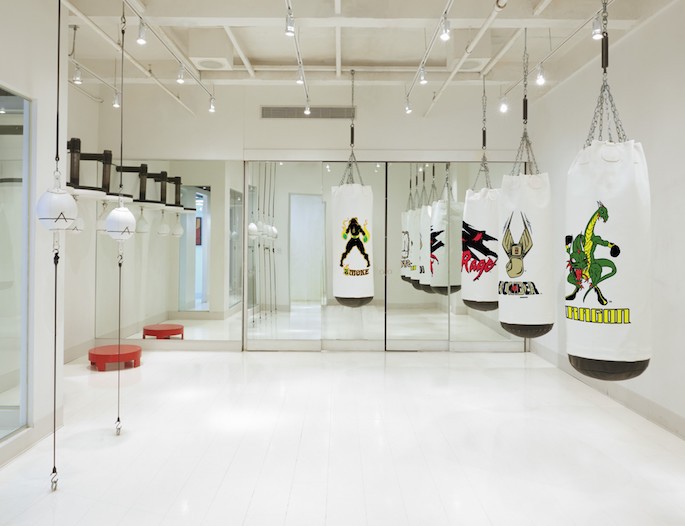 Former champion boxer Micheal Olajide Jr. has been a fixture on the NYC fitness scene for many years, and Aerospace was one of the first to offer boxing conditoning as a studio fitness workout. Co-founded with former ballet dancer Leila Fazel, Aerospace is a sleek and modern facility. It is far from your typical grungy boxing gym, but make no mistake, you’ll train like a pro. Classes like Aerobox, Aerojump and Aerosculpt are consistently rated some of the toughest in town – non-stop interval training consisting of a lot of jump rope, shadowboxing, along with other muscle endurance exercises with weight bars, hand weights, resistance bands and gliding discs. Aerospace is a favorite with Adriana Lima, Candice Jablonski and other Victoria’s Secret models, and where they go to get whipped into hot swimsuit shape. 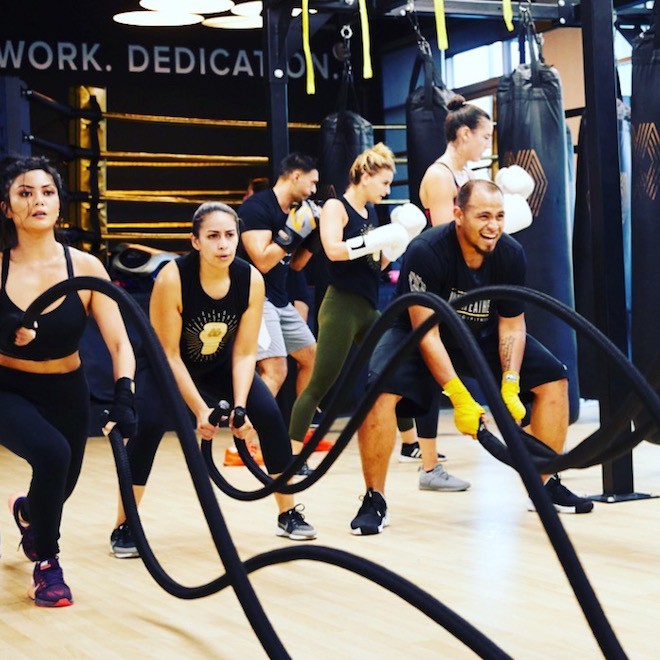 Don’t just train like a champ, train like THE champ — Floyd Mayweather, Jr! Mayweather Boxing + Fitness Club has locations nationwide, and offers authentic boxing training in a high-intensity group fitness setting. Each class consists of 12 rounds, with 2 warm-up, 4 bag, 4 floor, and 2 core rounds, and features a unique combination of high-intensity interval training. The studios are state-of-the-art, beautifully designed and lit, with equipment like freestanding training dummies, battle rope stations, and Concept 2 SkiErg machines you don’t find in other boxing workouts. Monitors around the studio feature Mayweather himself demonstrating different punches. Mendez is another old school, real fighters gym offering traditional boxing circuit training. Every 3 minutes a bells rings for intervals of jump rope, shadow boxing, heavy bag, mitt work, and other conditioning drills. There are trainers on the floor with years of fight experience, offering both group and invidual workouts, and stressing technique regardless of whether you have any intention of actually ever getting in the ring. The first class is free. Just show up and jump in! Opened in 1997, Church Street Boxing Gym, is the largest “fight gym” in New York City, offering a variety of boxing, Muay Thai, jiu-jitsu, kickboxing and MMA (Mixed Martial Arts) classes. With an authentic boxing gym vibe, greats such as Evander Holyfield and Lennox Lewis have trained here, yet the doors are open to any and all just looking to get into great fighting shape.

Title Boxing Club is a national chain with multiple US locations that offers boxing and kickboxing fitness workouts. These total body core strengthening workouts boast up to 1,000 calories burned per hour. Group classes take place in an industrial warehouse, movie set like facility, and feature traditional boxing drills and conditioning, with a focus on heavy bag training. First class is free!

HERE ARE A FEW OTHER STORIED BOXING GYMS AND FITNESS STUDIOS

IN A CITY NEAR YOU!

Prevail is a trendy fitness boxing gym in Los Angeles focused on circuit training and conditioning. A favorite of among LA models and former Miss USA Olivia Culpo, they offer fun, high-energy group boxing classes and an empowering exercise regimen.

EVERYBODY FIGHTS: THE CLUB

Founded by pro boxer George Foreman’s son, The Club offers 20 different combination classes, steam showers, a juice bar and a pro shop. This super popular spot caters to everyone from college students to businessmen, corresponding with the gym’s mantra of “Everybody Fights.”

Sam Colonna served as the Head Boxing Coach of Chicago Boxing Club, guiding them to 5 Chicago Golden Gloves Tournament Team Championships from 2008-2012. With over 30 years of experience, he now offers coaching and group classes not just to fighters, but anyone interested in boxing fitness.

Located in Philadelphia, home of Rocky Balboa, Strength Academy is located in the up-and-coming neighborhood of Northern Liberties. The gym offers Muay Thai, boxing, kettlebell, strength and conditioning classes under the tutelage of pro fighters and trainers specialized in each discipline.