Last month, on a perfect fall Friday in New York, I hopped on the ferry to Governors Island for the inaugural Big Apple stop of the Longines Global Champions Tour. It was a short walk to the grounds, where a showjumping ring had been constructed, situated in front of breathtaking views of the Statue of Liberty and the lower Manhattan skyline.

Along for the ride happened to be Bruce Springsteen. His daughter, Jessica Springsteen (above), is one of the top riders in the sport. Like the rest of us, he was en route to watch her and many more of world’s best show jumpers compete. TOUR VENUES IN MONACO, LONDON, BERLIN, MIAMI, AND PARIS (BELOW)

Since its launch in 2006 with six events, the Longines Global Champions Tour has grown to a twenty city tour, and become the premier equestrian series — putting the biggest stars of the sport, in the most spectacular locations, with unprecedented prize money at stake.

The Longines Global Champions Tour spans three continents and takes place in the world’s most exciting cities including Doha, Shanghai, Rome, London, Madrid, Cannes, and more – set in such unique and iconic venues as the Champs d’Elysee in Paris, the beach of Miami, and the coast of the Riviera in Monaco. New York and Stockholm were the newest stops added to the tour this year. 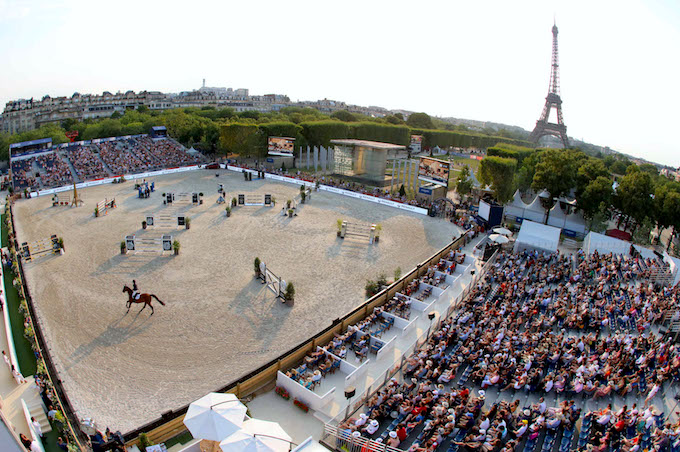 The Longines Global Champions Tour combines team and individual Grand Prix events. These fierce competitors unite on 16 different international teams in the Global Champions League, culminating in the team championship at the GC Playoffs in Prague this November. In addition, the winners of each LGCT Grand Prix on the tour will compete in Prague in the Super Grand Prix – the final showdown for the best of the best.

Since 2013, Longines has been the Title Partner and Official Timekeeper of the tour. With a long standing equestrian tradition, the oldest known Longines watch from 1869 was decorated with equestrian motifs and ushered in a handsome series of equestrian-themed pocket watches – thirteen of which have been reproduced in the Longines Equestrian Pocket Watch collection.

POCKET WATCH FROM THE LONGINES EQUESTRIAN COLLECTION; QUALIFIERS BOARD FOR THE SUPER GRAND PRIX

With the stage set for Prague, November 21-24, and the qualifiers announced for the Super Grand Prix, you might expect to see Bruce Springsteen in attendance again. As the Ramatuelle/Saint Tropez Grand Prix winner, Jessica will be one riders in contention for that individual championship title.

All the action can be viewed on GC TV– along with other highlights of the season.