Great Performances: The Best of 2019 From Team USA’s Women’s World Cup Win to the Washington Nationals’ first World Series Championship to record shattering times in both the Men’s and Women’s Marathon… 2019 was filled with many an epic sport moment! Here are the 12 pinnacles of the year that had everyone talking… including you!

Defending their 2015 title, Team USA won their fourth FIFA Women’s World Cup on July 7th in Paris, defeating the Netherlands 2-0. Scoreless at the half, Team USA took the lead on a penalty kick by Megan Rapinoe at the 62-minute mark, followed up by a second goal by midfielder Rose Lavelle just before the 69-minute mark.

The tournament generated as much attention for the quality of play as the inequality of pay. Despite the US women being ranked number 1 in the world, the US men’s team, currently ranked 30th, earns more when they lose than the women do when they win (Vox Media). In response to this pay disparity, 28 members of the women’s national team sued the US Soccer Federation for gender discrimination on March 8 to coincide with International Women’s Day. Crowds could be heard chanting “Equal Pay” throughout the tournament during the games in which the US played. 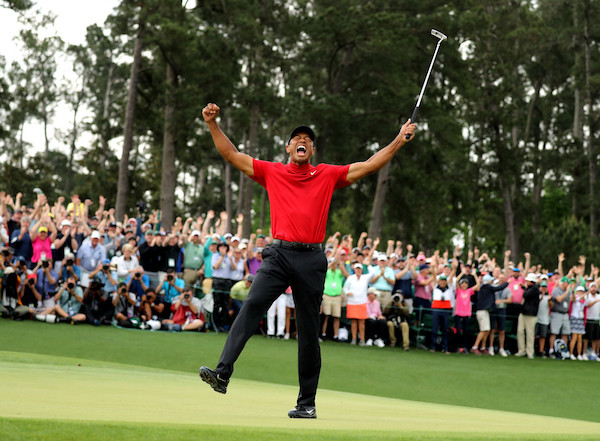 On April 14th, Tiger Woods won the Masters Tournament, his first major championship win in eleven years. It was his fifth Masters title and fifteenth Major. We all dreamed we’d see Tiger wear the champion’s green jacket once again – but wondered if we ever would. Marking an incredible comeback from injuries and personal hardships, the 43-year-old played like the Tiger of old, coming from behind to win the tournament by a single stroke over Xander Schauffele, Dustin Johnson and Brooks Koepka, who were tied for second place. Reuters/Lucy Nicholson 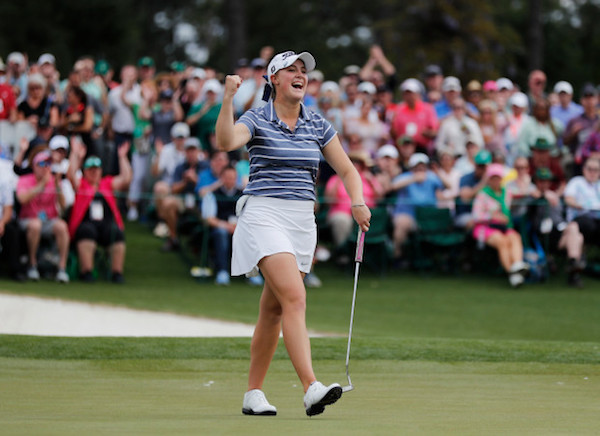 The Women Take the Course

Golf history was made a week earlier on that same course with the inaugural Augusta National Women’s Amateur Championship. Home of the Masters Tournament, it was the first time women had ever competed at Augusta National Golf Course, and the victory was captured in dramatic style by Jennifer Kupcho with a come from behind win. Plagued by a migraine that fogged her vision for three holes, the 2018 NCAA Division I Golf Champion and top-ranked amateur in the world played the last six holes in 5 under, and buried a 20-foot birdie putt on the 18th hole to become the first female champion at Augusta National. Both Kupcho and runner-up Maria Fassi had deferred their LPGA Tour qualifications to play their senior college seasons – and this tournament. Their head-to-head play in the final pairing added an indelible exclamation point to a ground-breaking week for women’s golf. AP Photo/David Goldman 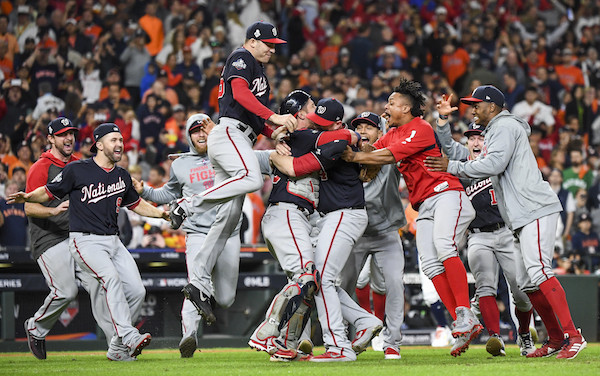 It was a World Series of firsts, one in which the road team won every game – i.e. neither team won at home. Going the distance in the 7 game series, the Washington Nationals staved off defeat in game 6 and took game 7 with a 6-2 win over the Houston Astros. Scoring all their 6 runs in the final three innings, it was the first World Series championship in the history of the Washington Nationals franchise. Jonathan Newton/Getty Images 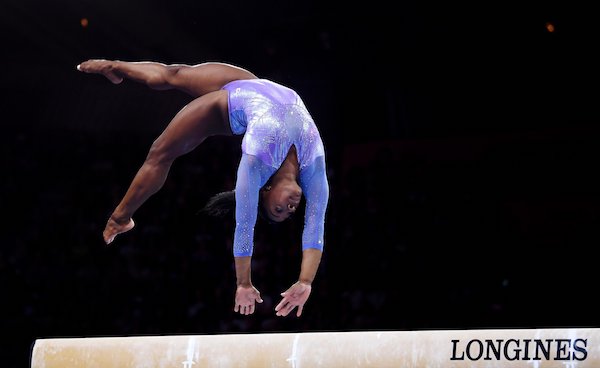 Simone Biles solidified her spot as the greatest gymnast ever at the 2016 Summer Olympics – only to come back in 2018 and reassert her dominance at the World Championships with six medals, four of them gold. Her 2019 performance at the World Championships in April was no less awe-inspiring. Biles added five more gold medals to her collection – with skills of unprecedented difficulty she executed flawlessly. Landing an incredible triple-twisting double backflip on the floor and double-twisting double backflip dismount on the beam, we can only wonder how she’ll top all that in Tokyo this summer at the 2020 Summer Olympics. Laurence Griffiths/Getty Images

Heralded last year in our Great Performances for 8 straight marathon wins, including gold at the 2016 Summer Olympics in Rio, in April the indomitable Kenyan Eliud Kipchoge broke the elusive two-hour marathon barrier in Vienna with a time of 1:59:40! Because it was not run under open marathon conditions and featured a heavy rotation of 41 professional pacesetters, the time was not recognized as a world record – however it still represents a milestone once believed unattainable. Herbert Neubauer/Getty Images 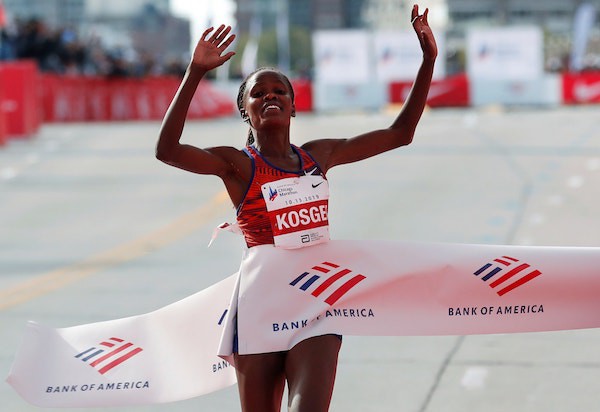 One day later in the women’s marathon, fellow Kenyan Brigid Kosgei smashed Paula Radcliffe’s 16-year old record to win the Chicago Marathon in a time of 2:14:04. Defending her 2018 title, she put almost 7 minutes between herself and the competition, and sliced 81 seconds off Radcliffe’s 2003 London Marathon record. This one counts! Mike Segar/Reuters 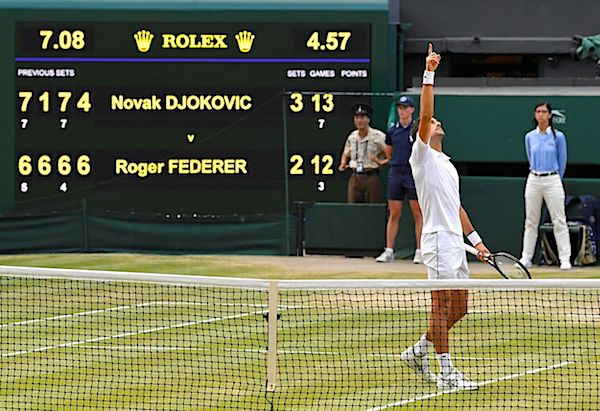 In one of the greatest matches of all time, Novak Djokovic defeated Roger Federer in a 5-set battle at the Wimbledon Men’s Singles final — unprecedented in that it was the first time a tiebreaker was played in a fifth set at Wimbledon. Due to rule changes after last year’s marathon 50-game fifth set in the Semis, it had been determined a tie breaker would played at 12-12. In the 25th game of the set, it was crushing to see Federer defeated 7-3 after almost 5 hours of such epic tennis — despite the fact it was the defending champion Djokovic’s fifth Wimbledon Men’s Championship and his 16th Grand Slam title. 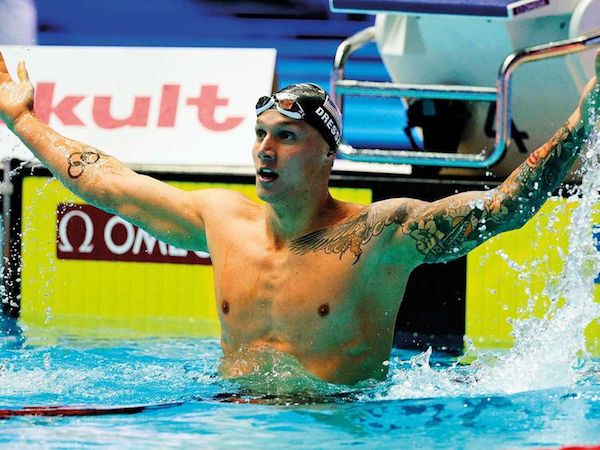 Caeleb Dressel takes on the Worlds

In July, US swimmer Caeleb Dressel won a record eight medals, including six gold, at the 2019 World Aquatics Championships in Gwangju, Korea – breaking Michael Phelps’ 100-meter butterfly world record along the way. A two-time Olympic gold medalist, Dressel holds multiple World and American records the 100 meter butterfly, 50 meter freestyle, 50-yard and 100-yard butterfly, and 200-yard individual medley – just to name a few! The world loves swimming — every 4 years — and with the 2020 Summer Olympics in Tokyo on the horizon, Dressel will undoubtably be the big story and one to watch at the games. 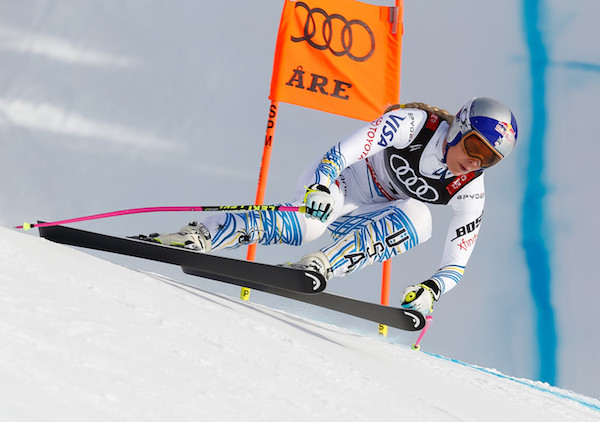 Lindsey Vonn announced her retirement from skiing in February in an Instagram post that read: “I have always pushed the limits of ski racing and it has allowed me to have amazing success but also dramatic crashes. My body is screaming at me to STOP and it’s time for me to listen”. After overcoming so many devastating injuries that would have sidelined most long before, Vonn left the sport as the greatest female ski racer in history, and with a final medal in the Downhill at the World Championships in Are, Sweden. Though it wasn’t a gold, she went out on top with a bronze — as big a win as any. 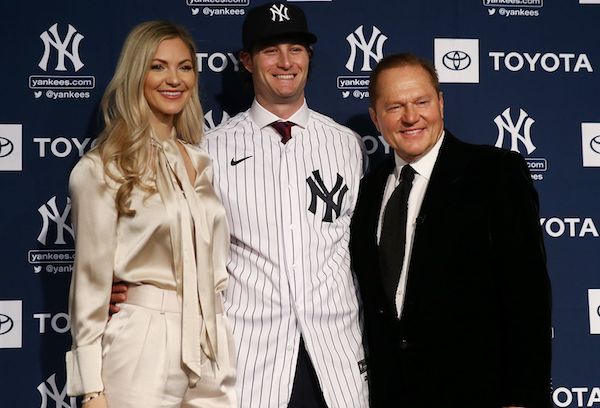 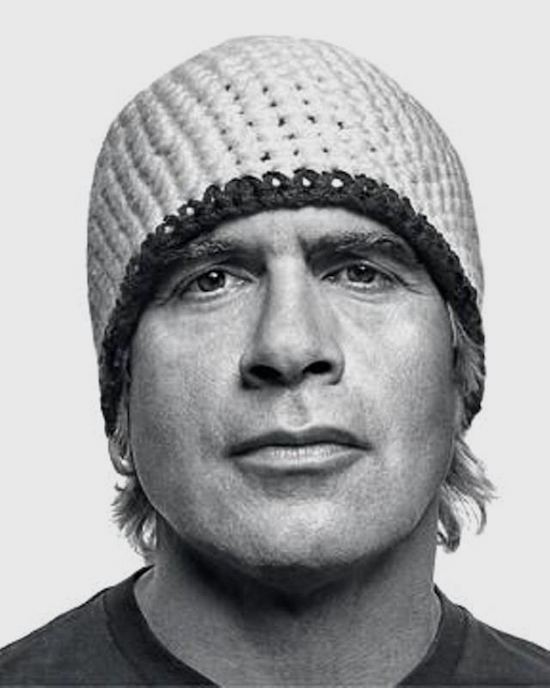 In November the world saw the passing of Jake Burton Carpenter, the Founder of Burton Snowboards. He was 65 and the cause was complications from recurring testicular cancer. Burton Carpenter was not the inventor of the snowboard, but the man responsible for turning a backyard toy known as the Snurfer into a mainstream and Olympic sport, creating a global industry and community in the process.

Burton Carpenter began making snowboards in 1977, selling them out of the back of his car to such limited success he almost gave up. But as word of mouth spread, sales grew. In developing a snowboard with bindings and the edge control of a ski, he worked with the ski industry to allow it at the resorts. When he started not one ski mountain in the US permitted snowboarding. It is now at 473 of the nation’s 476 ski resorts. Nearly eight million people snowboard in the US – and about a third of them ride a Burton board.