From the Gold Medals of the 2018 Winter Olympics, to a Triple Crown winner, to the craziest football play ever… 2018 was filled with many an epic sport moment! Be you sports fan or not, here are the eight that were great performances that had everyone buzzing:

TIGER WOODS GETS A WIN… FINALLY!

Tiger Woods thrilled the golf world and us all in September with his first victory in five years at the 2018 Tour Championship. After multiple back surgeries and failed comebacks, along with his notorious DWI arrest and extra-marital affairs, it was hard to imagine Woods would ever be back on top of the leaderboard again. So joyous were the crowds, they swarmed around him en masse as he walked down the fairway to the 18th hole where he tapped in that final putt for the win. 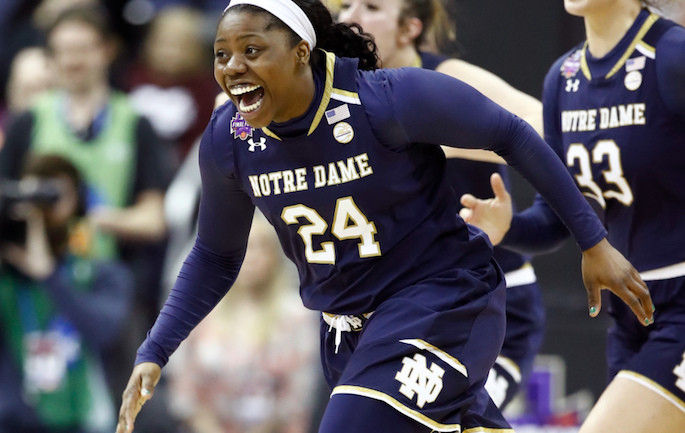 In the Final Four tournament, Arike Ogunbowale made not just one, but two incredible game-winning buzzer-beaters to clinch the 2018 NCAA Womens Basketball title for Notre Dame. Sinking a 3-pointer in the final seconds for the championship win over Mississippi State, 61-58, it was her buzzer beater in overtime in the semi-finals against the undefeated UConn Huskies that got Notre Dame to the final game. Voted the Final Four Most Outstanding Player, this sharpshooter is back on the court this year as a senior with her eyes on the repeat prize. 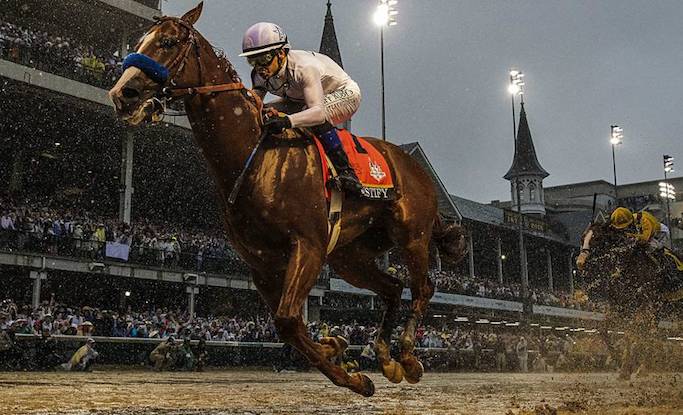 It had been well over 30 years since we had a Triple Crown winner until American Pharoah finally won it in 2015. We would only have to wait another 3 years for Justify to win the trifecta in 2018 and with a dominance not seen since the great Secretariat. At the Kentucky Derby, Justify became the first horse since 1882 to win without having competed as a 2-year-old. He went on to take the Preakness and Belmont Stakes and became the most inexperienced horse in history to win the Triple Crown — and retired with an undefeated record! 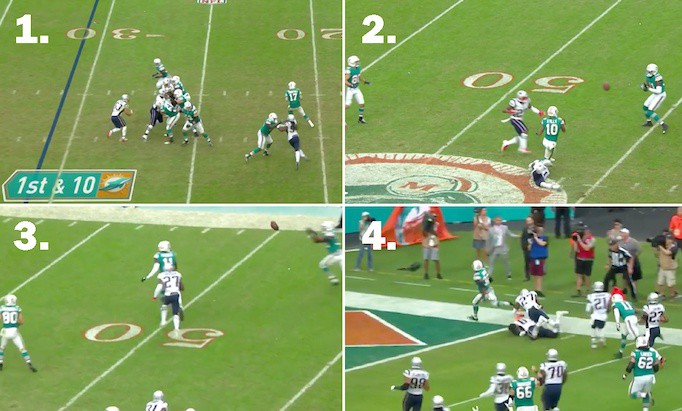 THE MIRACLE AT HARD ROCK STADIUM

On December 9th, in what is now called “The Miracle at Hard Rock Stadium”, the Miami Dolphins pulled off a win over the New England Patriots to keep their playoff hopes alive in an incredible play the likes of which no one had ever seen – well, seen work that is. Trailing 33-28 with just 7 seconds left to play, Dolphins quarterback Ryan Tannehill threw the ball to wide receiver Kenny Stills, who tossed it to DeVante Parker, who tossed it to Kenyan Drake, who zig-zagged down the field for a touchdown. This one you gotta see to believe! Click to watch it HERE. 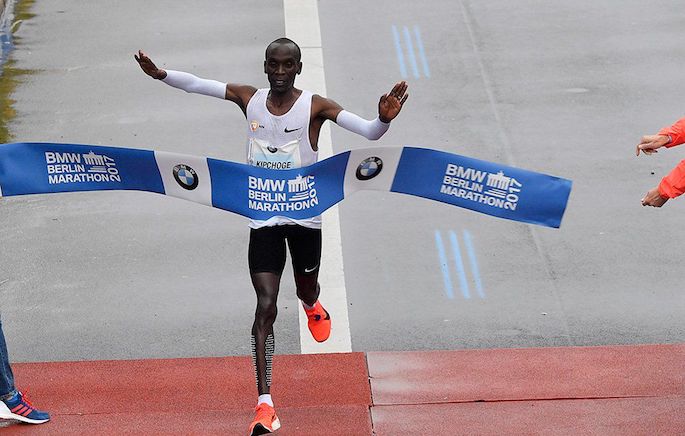 Eliud Kipchoge is to the marathon what Usain Bolt is to the sprint. Winning 8 straight marathons, including gold at the 2016 Summer Olympics in Rio, he shattered the world record at the Berlin Marathon in September by 1:18 seconds with a time of 2:01:39. That’s 4:38 per mile for 26.2 miles straight! Kipchoge also participated in Nike’s marathon/marketing stunt, Breaking2, with the goal of breaking the 2-hour marathon barrier under hyper-optimized conditions. Though he did not succeed, he did run a 2:00:25 marathon, the fastest ever. 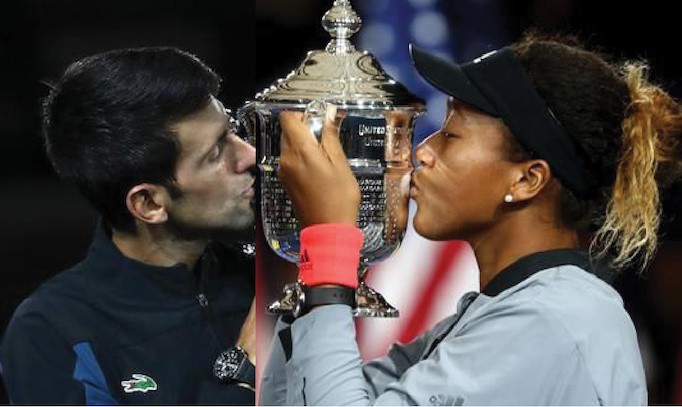 After a year of injuries sidelined him in 2017, Novak Djokovic returned to dominance in 2018 with Grand Slam wins at Wimbledon and the US Open, and finished the year ranked #1. In Women’s Tennis, the performance of the year goes to Naomi Osaka at the US Open. In her first Grand Slam final, playing the great Serena Williams. Osaka overcame the distraction of a meltdown by Williams over a bad call that turned center court into a circus and the crowd into a frenzied mob. It was a victory that was far from a celebration. Both players were left in tears at the awards ceremony which you can read about more here: 2018 US Open Women’s Final: One Not Soon Forgotten 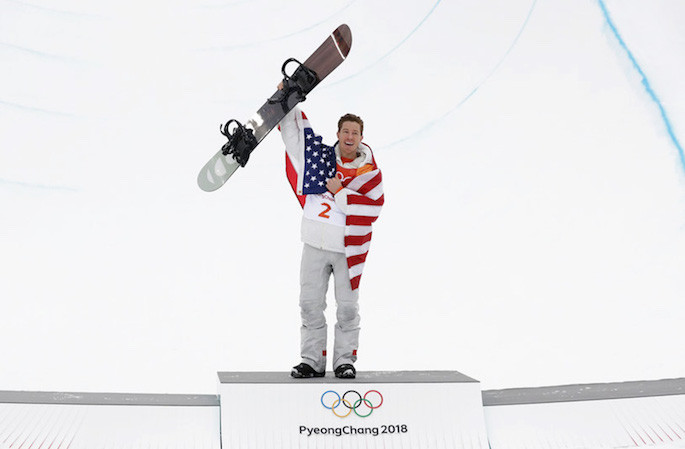 SHAUN GETS HIS GROOVE BACK

After leaving Sochi empty handed in 2014, Shaun White came back to win his third gold medal in the Mens Snowboarding Half Pipe at the 2018 Winter Olympics in Pyeongchang. In a show of brilliance, he landed back to back 1440s (four revolutions) – an insane trick combination which had resulted in a devastating face-smashing crash just weeks before. Throwing down an epic run under pressure, he was back on top of the podium once again. 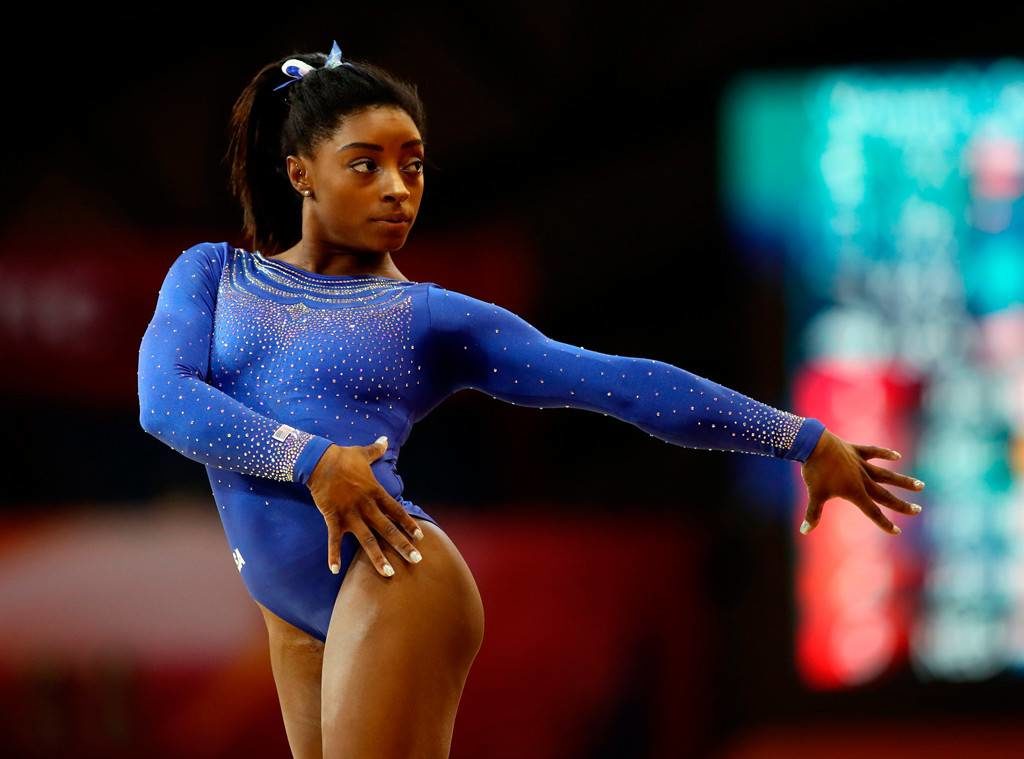 Simone Biles solidified her spot as the greatest gymnast ever at the 2016 Summer Olympics. But she came back in 2018, after a break from the sport, to reassert her dominance at the World Championships in November with six medals, four of them gold — all while in excruciating pain! Biles spent the night before qualifying in the hospital with a kidney stone, unable to take prescription pain medication because of doping regulations. What more can you say? That’s a wrap!

The Great Performances of 2017