Lindsey Vonn announced her retirement from skiing last week on Instagram in a post that read: “I have always pushed the limits of ski racing and it has allowed me to have amazing success but also dramatic crashes. My body is broken beyond repair and it isn’t letting me have the final season I dreamed of. My body is screaming at me to STOP and it’s time for me to listen”.

Vonn leaves the sport as the greatest female ski racer in history, but for this warrior who famously battled back time and time again from devastating injuries, this early exit not the ending she envisioned. When Vonn said this would be her final season, there was one more record she planned to break before she said farewell — most World Cup wins held by Ingemar Stenmark. And though that didn’t happen, he was there at finish line at her last race today to congratulate her on a storied career.

Coincidentally, another snow sport superstar, Chloe Kim, also announced she was retiring last week, but under polar opposite circumstances. The 2018 Gold Medalist in the Women’s Halfpipe, Kim was the face of the Pyeongchang Games last February. At 17 years old, not only did she live up to the Olympic hype and pressure to become the youngest woman to win a gold medal in the halfpipe, but she did it with unprecedented flair in a run that featured two back-to-back 1080-degree spins — a combination no other woman has ever done in a competition. 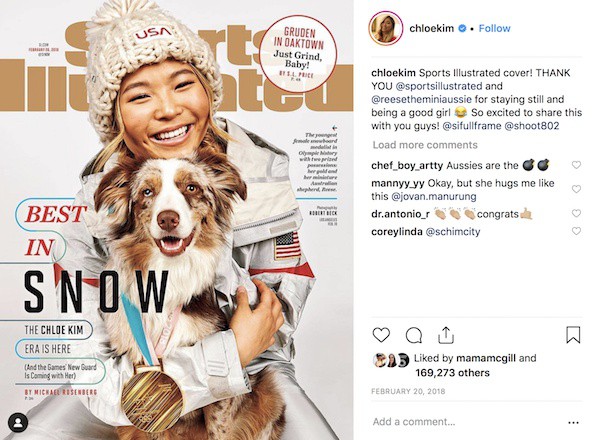 Yet at 18, with a body still seemingly healthy and at the top of her game, Kim is saying goodbye to the sport — at least for now. At a press conference just after her 5th X-Games title, she announced she was heading to Princeton next fall. She had been accepted last year, but with the Olympics deferred her enrollment. “My life has always been so different. I’d love to live a normal life for once.”

One can only think Lindsey Vonn would give anything not to be normal. She has spent her career in the spotlight, becoming the first American woman to win Olympic gold in the downhill at the 2010 Vancouver Games, two Olympic bronze medals in 2010 and 2018, and seven world championship medals from 2005 to 2017. The wins, crashes, and comebacks – along with a made-for-TV personality – made her a star on and off the slopes, with lucrative corporate endorsements and sponsorships. And then there was the high-profile relationship with Tiger Woods in 2013.

Despite being one of the most famous female athletes of all time, Lindsey had bigger dreams beyond her gender. Frequently training with men and on their riskier racecourses, Vonn tried to enter Men’s World Cup races numerous times over the years. Her requests were never granted, but with 82 World Cup victories, her goal was in site to break Ingemar Stenmark’s record of 86. In that same Instagram post Vonn went on to say, “Retiring without reaching my goal is what will stay with me forever. However, I can look back at 82 World Cup wins, 20 World Cup titles, 3 Olympic medals, 7 World Championship medals and say that I have accomplished something that no other woman in HISTORY has ever done, and that is something that I will be proud of FOREVER!” 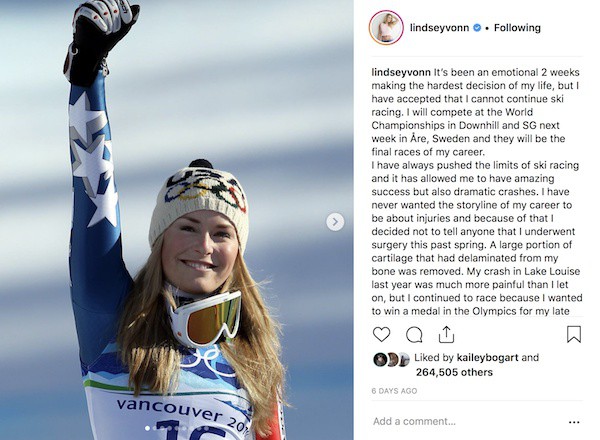 At Lindsey’s last race today today, the Downhill at the World Championships in Are, Sweden what everyone wanted more that anything was for her to make it safely down the hill. With another spectacular crash this week in her penultimate race, the Super G, even the steely Vonn said she had a hard time controlling her nerves. “I have to admit I was nervous, probably the most nervous I’ve ever been in my life”. And though it wasn’t a gold medal win, she goes out on top with a bronze medal, finishing her career on the podium — as big a win as any.

Meanwhile Chloe Kim claimed another title on Friday taking gold at the FIS World Championships in Park City, Utah, further establishing her dominance at the top of the sport. Maybe after a few years as a regular undergrad, we will see her back in the halfpipe competing for Team USA in Beijing 2022. We’re not ready to say goodbye to her yet either…