Pharrell Williams hit the courts with adidas Originals last year at the US Open for an unforgettable Mondrian inspired tennis collection seen in play on such top players as Garbine Muguruza, Alexander Zverev, and Angelique Kerber. 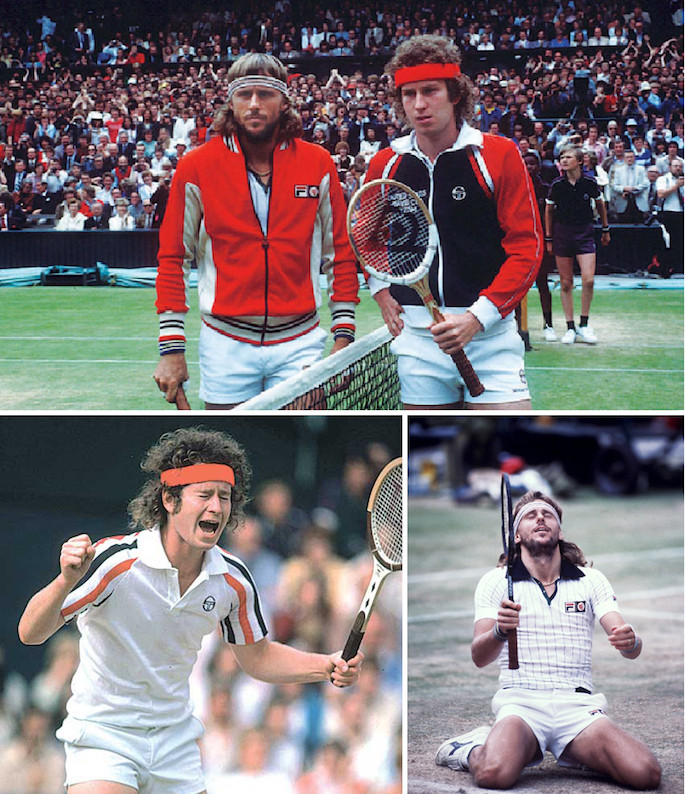 In what was considered one of the most epic matches in tennis history, Björn Borg defeated John McEnroe in five sets at the 1980 Wimbledon final: 1–6, 7–5, 6–3, 6–7, 8–6. Equally memorable were both players’ attire — Bjorn Borg in his iconic Fila and McEnroe in his signature Tacchini, both sporting long hair and colorful terry headbands. 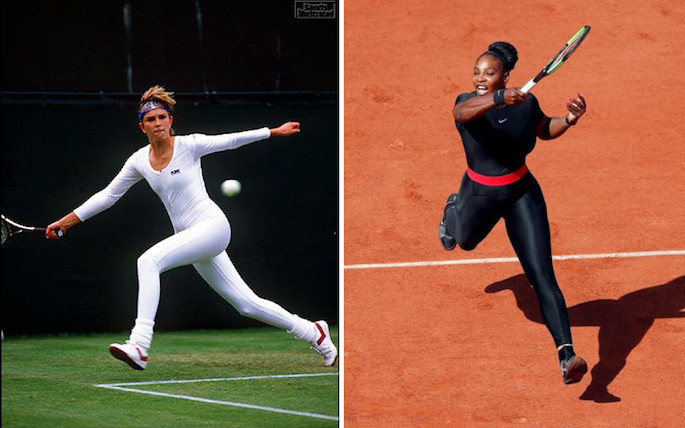 Serena Williams made a big fashion statement at the French Open this year — her first major back as a new mom – marking the occasion in a black Nike catsuit. Anne White was the first player, however, to wear a catsuit in competition, pushing the boundaries of the all-white tennis attire rule at Wimbledon in 1985. It was banned by match’s end (actually mid-match as play was suspended for darkness) and she returned to the court the next day in traditional attire. Serena Williams catsuit was also banned, although not until last week when the French Tennis Federation announced new dress code regulations for next year. Catsuits are not included. 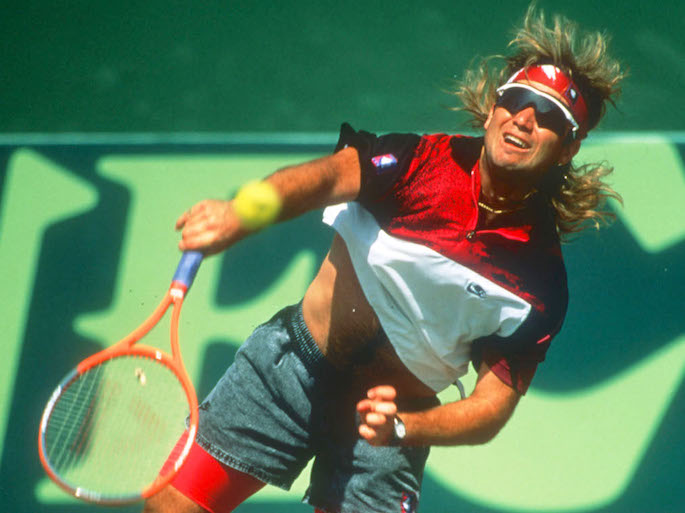 Andre Agassi played staid tennis apparel off the courts in the 1990’s with his rock star style, big hair, screaming neon, and those Oakley Blades. Most unforgettable were the acid-washed Nike denim shorts, with sewn-in pink neon compression layer, worn at the French Open in 1990. 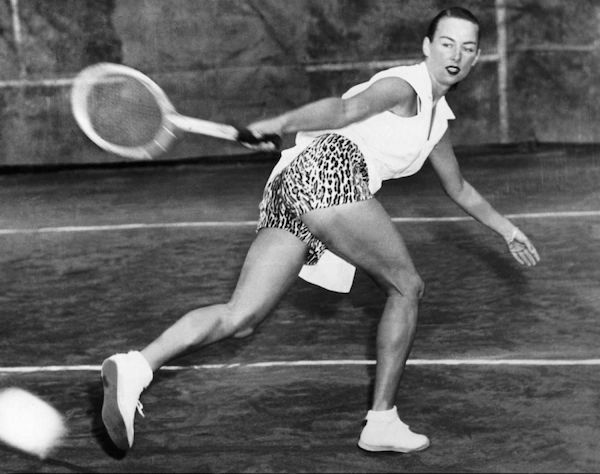 Playing at Madison Square Garden in 1950 in a match against Pauline Betz, “Gorgeous Gussie” Moran as she was known, turned the other cheek flaunting a pair of leopard shorts under her tennis dress. The previous year she had started her foray into tennis risque with a pair of white lace britches under her all white Wimbledon kit. 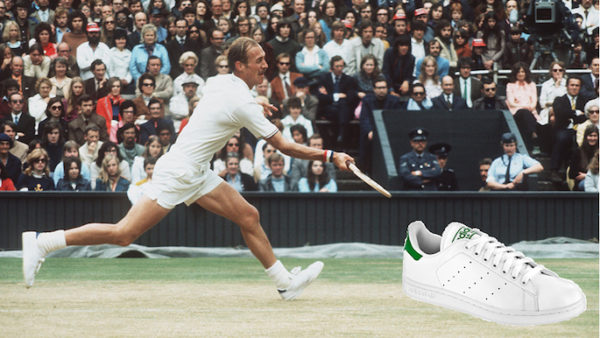 Originally introduced by adidas in 1964 as the Haillet, named for French tennis professional Robert Haillet, American Stan Smith became the shoe’s namesake in 1971 as the number 1 player in the world at the time. The adidas Stan Smith has since left the tennis court, but has become one of the most popular sneakers in history with total sales over the past four decades of more than 50 million pairs! 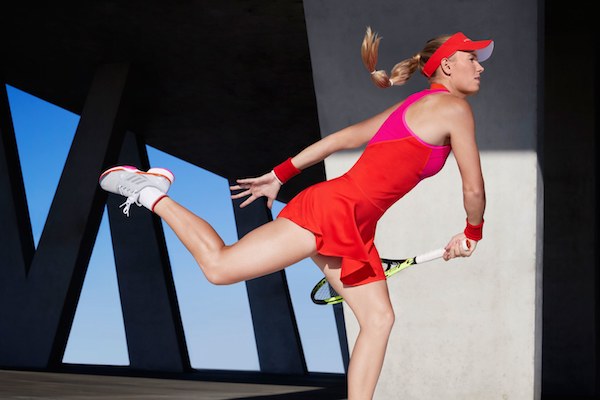 Designer Stella McCartney’s was one of the original contemporary designers to put their fashion spin on athletic wear, giving birth to the term “athleisure” with her sport and fitness collections for adidas. Caroline Wozniaki is one of the top 10 players in the WTA to sport her adidas by Stella McCartney tennis line, and last year’s US Open kit was a highlight — popping off the court in juicy shades of cherry, hibiscus, and orange. 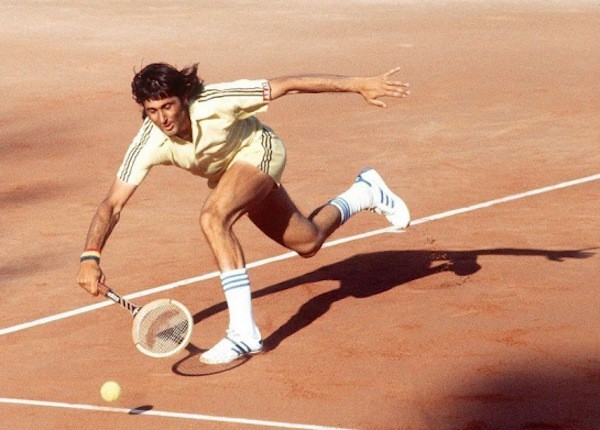 Tennis’ original bad boy, Romanian Ille “Nasty” Nastase looked good in 1973 on the red clay of the Roland Garros in his signature adidas 3-stripe shirt and shorts — matching in canary yellow. Nastase was the Nadal of his day, virtually untouchable on clay, and won the French Open that year without dropping a set. 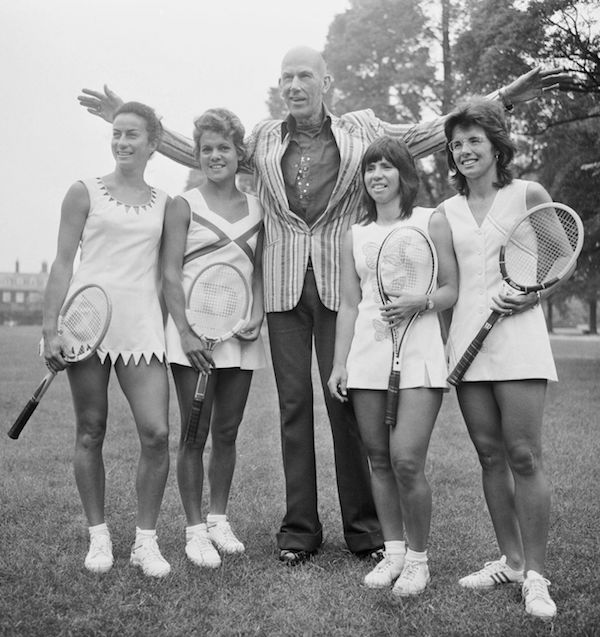 Fashion designer Ted Williams was a larger than life presence in women’s tennis in the 1970’s as the official clothier of the Virginia Slims Tour. Portrayed by Alan Cummings in the recent film “Battle of the Sexes”, Tinling dressed such top players as Virginia Wade, Evonne Goolagong, Rosemary Casals, and Billie Jean King shown above. Creating unique and distinctive looks for each player, he was also responsible years earlier for Gussie Moran’s famous white lace knickers at Wimbledon in 1949 mentioned above. Holding the position of Player Liason at Wimbledon at the time, the outfit got him fired — although he would later be rehired and was inducted into the International Tennis Hall of Fame in 1986. For more about Tinling check out this entertaining short feature from the Tennis Channel. 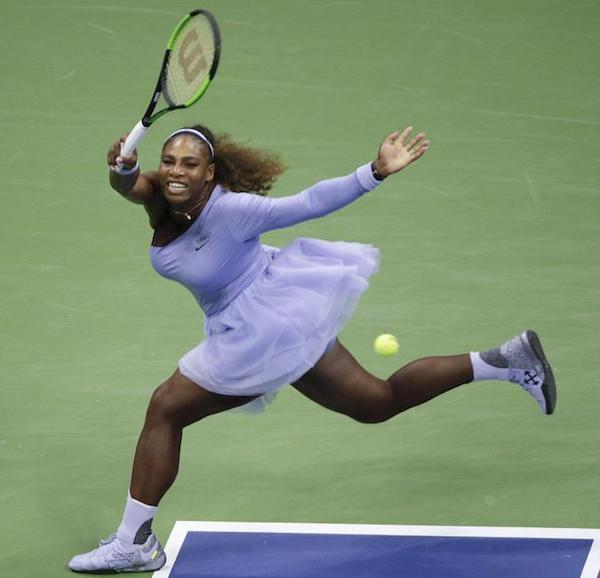 Perhaps better suited for the ice skating rink than the tennis court… like it or not one can’t deny Virgil Abloh’s collaboration with Nike for Serena Williams at this year’s US Open IS a fashion statement. Abloh is probably the hottest designer right now, recently appointed Creative Director of Menswear for Louis Vuitton and fresh off one of the biggest sneaker collaborations with Nike ever, “Ten Icons Reconstructed”. No doubt this one will go down in tennis history as one of the most memorable!