No live sports? Watch these movies instead! In the wake of the Coronavirus pandemic, many major sporting events and entire seasons have been cancelled or suspended: March Madness (NCAA Division I Men’s Basketball tournament); the NHL, NBA, MLB and NASCAR seasons; Indian Wells (BNP Paribas Open tennis tournament); and the Players Championship and Masters Tournament. For fans who weren’t planning on attending these events, this means no televised sports either.

So while you’re hunkered down at home with nothing to watch this weekend, we thought we’d offer some alternatives. Many of the greatest movies of all time have been sport themed, and we’ve got 12 of the all-time favorite baseball, hockey, basketball, tennis, golf, and race car movies to keep you entertained!

This 1980 comedy classic centers around a snobby country club golf course and stars Bill Murray as a gopher-obsessed groundskeeper; Chevy Chase as a wealthy new age golf guru; and Rodney Dangerfield as a loud and vulgar condo developer intent on buying the club and developing the land. The three are at their funniest, deploying some of their most memorable antics and quotable lines in a hilarious movie you definitely don’t need to be a golf fan to enjoy. 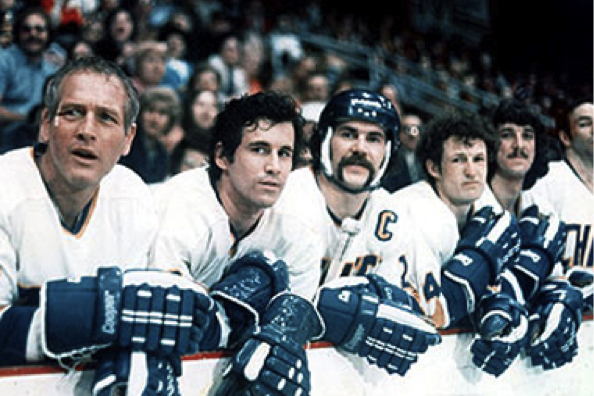 Another sport comedy classic, Slap Shot stars Paul Newman as the coach of a struggling minor-league hockey team. In an effort to build up lagging attendance at games, he signs three hard-charging players, the Hanson Brothers, whose violent and thuggish style of play excites the fans and draw big crowds. Outrageous comedy, hard-hitting action, memorable one-liners, and unforgettable characters make one of the best sport movies ever!

Emma Stone and Steve Carell bring their A-game to this electrifying true story of the 1973 tennis match between Billie Jean King and Bobby Riggs that became the most watched televised sports event of all time. In what was a true battle of the sexes, Stone stars as King, who becomes a leader in the women’s sports movement, founding the WTA – and later, a pioneer for gay rights, coming to come to terms with her own sexuality. Carell stars as Riggs, the quintessential male chauvinist pig, who gambled his legacy and reputation in a failed bid to relive past glories. 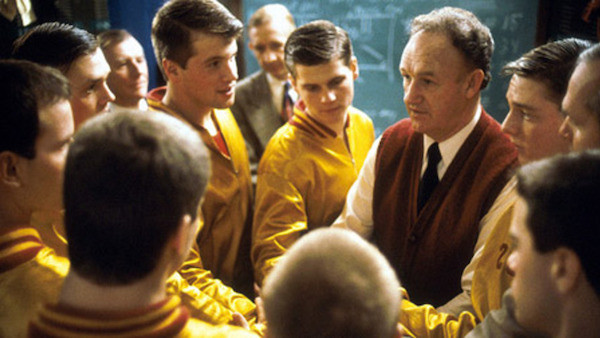 One of the all time great sports films, Hoosiers is a classic tale of redemption. Starring Gene Hackman as the volatile coach, and Dennis Hopper as a former star player-turned alcoholic, they lead a small-town basketball team on an improbable run to the Indiana high school championship game. Inspired by the true story Milan Indians’ state title of 1954, the film was nominated for two Oscars. 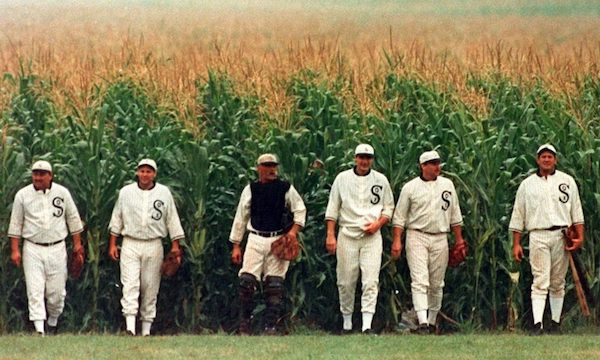 “If you build it, he will come” is one of the most memorable lines in movie history, and the words Iowa farmer Ray Kinsella, played by Kevin Costner, hears one night in his cornfield. Ray builds a baseball diamond on his land, and the ghosts of Shoeless Joe Jackson, and the seven other Chicago White Sox players banned from the game for throwing the 1919 World Series, start emerging from the crops to play ball. However, Ray learns the field of dreams is about much more than playing ball. 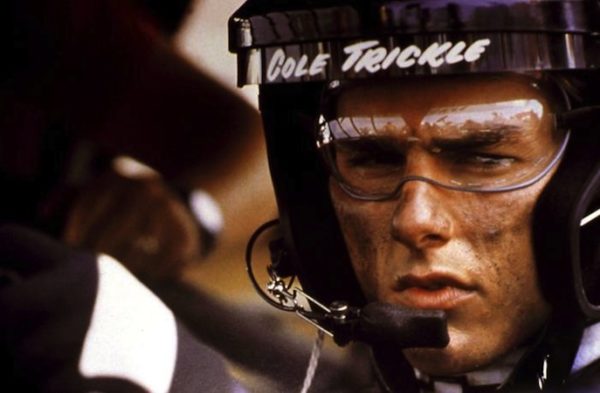 Top Gun on the race track, Days of Thunder stars Tom Cruise as the cocky Nascar racer Cole Trickle. A hot driver with a hot temper, his rivalry with a fellow racer leads to an accident that lands him in the hospital where he falls for his doctor, played by Nicole Kidman. Directed by Tony Scott, this action-packed film is where Tom and Nicole began their off set relationship.

The true story of the 1980 U.S. Olympic Hockey team whose gold medal win over the heavily favored and seemingly invincible Soviet professionals was dubbed the “Miracle on Ice”. Kurt Russell stars as player turned head coach Herb Brooks, who assembled a team of hot-headed college all-stars. Their improbable win became a symbol of American patriotism during the Cold War, as well as his own personal redemption. 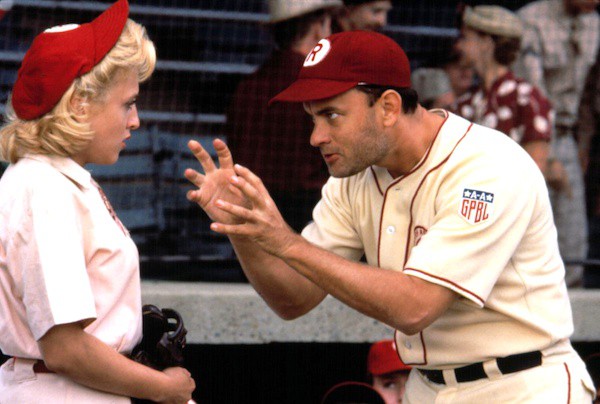 A League of Their Own is the true story of The All-American Girls’ Professional Baseball League, founded in 1943, when most baseball-playing young men were away fighting World War II. Not wanting baseball to be on hold indefinitely, the owners decided to form teams with women. Directed by Penny Marshall, the movie stars Madonna, Rosie O’Donnell, Geena Davis, Lori Petty, and Tom Hanks in some of their most entertaining roles. Who can forget “There is no crying in baseball!” 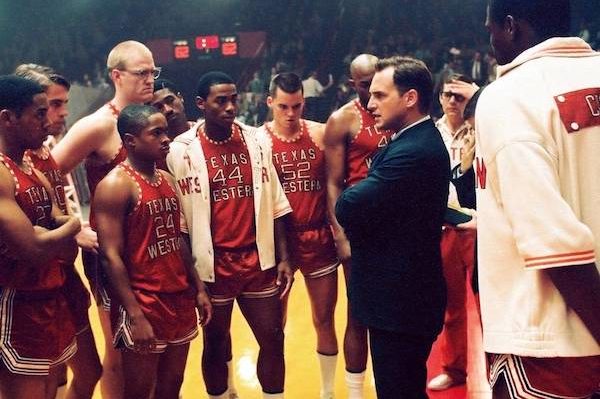 Glory Road is the dramatic and inspirational true story of the team that changed college basketball — and the nation — forever. Josh Lucas stars as future Hall of Fame coach Don Haskins of Texas Western University, who bucked convention by starting his best players in history’s first all-African American lineup. In a turbulent time of social and political change, their unlikely success sends shock waves through the sport, culminating in an epic showdown between the underdog Miners and #1 ranked Kentucky for the National Championship. 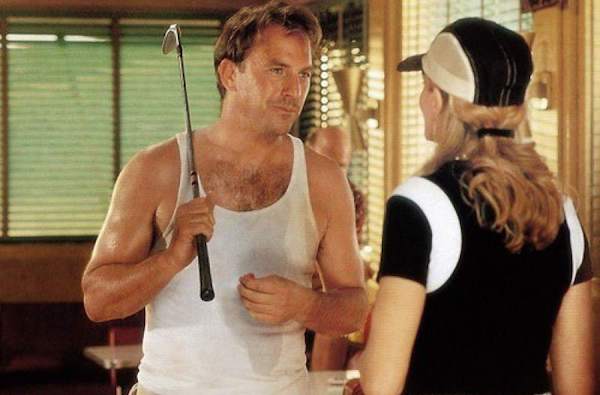 Tin Cup stars Kevin Costner in another sport role as Roy McAvoy, a talented pro golfer whose bad attitude has cost him everything. Now working as a golf instructor, he falls for his newest pupil, Dr. Molly Griswold played by Rene Russo — a psychiatrist who happens to be the girlfriend of PGA Tour star and Roy’s rival, David Simms. Humiliated by Simms at a celebrity golf tournament, McAvoy decides to make a run for the PGA Tour, as well as Molly’s heart. 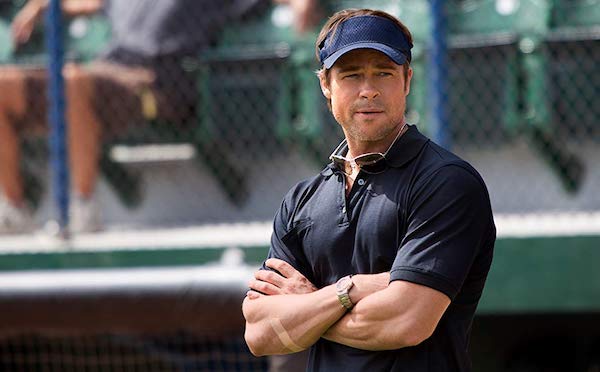 The most Oscar nominated sports film, including Best Picture, Best Actor, and Best Supporting Actor, Moneyball is based on the true story of Oakland A’a manager Billy Beane, played by Brad Pitt, forced to reinvent his team on a lean budget. Inspired by a young Yale grad played by Jonah Hill, Beane defies conventional baseball scouting by using a controversial method of computer generated analysis called Sabermetrics. He puts together a winning team made up of flawed and overlooked players, all of whom have the ability to get on base and score runs — outsmarting and beating the richer clubs. 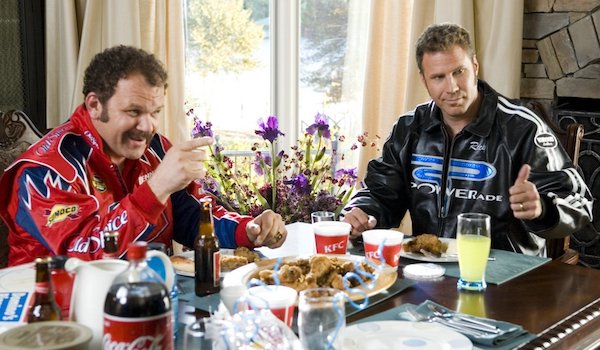 Starring Will Ferrell as race car driver Ricky Bobby, this hiliarious spoof takes place on the NASCAR circuit and the famed Talladega track. Paired with John C.Reilly as his teammate Cal Naughton Jr., the indomitable duo are know by their fans as “Shake” and “Bake”, until a flamboyant French Formula One driver Jean Girard, played by Sacha Baron Cohen challenges them for supremacy. All three are at their funniest in this sport comedy classic!