4 Days in Rio: How To Crush the Olympic Games! Four years ago during the 2012 Summer Olympics in London, I started blogging about the sport and style of the Games. Fast 4-ward to 2016, and STYLE of SPORT is here in Rio at the Summer Olympics as a guest of Omega watches, the Official Timekeeper of the Olympic Games — a distinction they have held for 27 Olympics since the 1932 Summer Games in Los Angeles. So this is how you crush the Olympics with some VIP access and a bit of luck on your side.

DAY 1: Take an overnight flight from NYC to Rio and hit the ground running! After a quick shower at the hotel (freshen up… it’s going to be a long day), head over to the Olympic Park for the Men’s Tennis semi-final match between Juan Del Potro vs. Rafael Nadal. You may think you’re going to see your typical major tennis event, but this is a battle between two countries, Argentina vs. Spain, and the crowd is as loud as a World Cup soccer match. Follow that with a little swimming just across the park. How about the Men’s and Women’s 4 x 100 medley relay and USA wins gold in both! You get to see Michael Phelps anchoring the men’s race, but first do a double take when you spot Boomer, the most famous Olympic baby ever, and family in the Omega Hospitality Lounge having a bite with the rest of us before Dad swims. You’re off to a good start!

DAY 2: Golf was originally on the schedule, but with so many big name players dropping out with Zika fears, it’s a quick switch to Men’s Basketball and Team USA vs. France. Cool to see “Melo” (Carmelo Anthony) in the Olympics, but the day is all about the night: Track & Field and the Mens 100m. You will now witness history as Usain Bolt wins his third straight gold medal in the 100m. Your seats are at the finish line.

DAY 3: When in Rio… learn how to Samba with a visit to Samba City in the morning where it’s Carnival all-year round. Then head over to Ipanema for lunch at the Omega House, the hot spot for athletes and celebrities housed in the beautiful Casa de Cultura Laura Alvim. Do a selfie with swimmer Ryan Murphy who’s just won three gold medals and has also popped by for lunch. Hold one of the original Omega stopwatches that timed the 1932 Olympics in Los Angeles. Then go cross town to Copacabana for some Beach Volleyball at probably the most scenic of all the venues. The stadium is on the beach with a view of Corcovado in the distance, and you’re there in time for the quarterfinal match that just happens to be between USA and the host country of Brazil. Brazil wins the match and prize for audience participation! 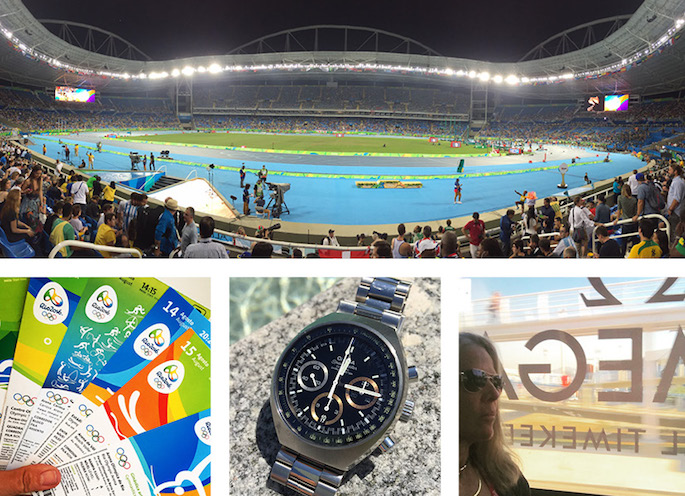 DAY 4: The afternoon features the Men’s and Women’s Gymnastics apparatus finals, one of which is the Women’s Floor Exercise. You will watch Simone Biles win her fourth gold of the Games and teammate Aly Raisman win silver, but first say hello to legendary Olympic champion Michael Johnson who you see in the elevator of the hotel. His 400m record set in 1999 was broken a couple days before by South Africa’s Wayde van Niekerk… a race you also happened to see on Day 2. You will also catch Michael Phelps walking through the hotel lobby. Think to yourself this really is all too good to be true, but wait until that night when you’re in the airport, sitting in the American Airlines lounge. Some guy will ask you about the Speedmaster Mark II “Rio 2016” watch you’re wearing that Omega loaned you for the trip. He will apologize for bothering you and while you look at him stunned, he will introduce himself as Mark Spitz.

The Olympics truly are what dreams are made of… and for spectators too.